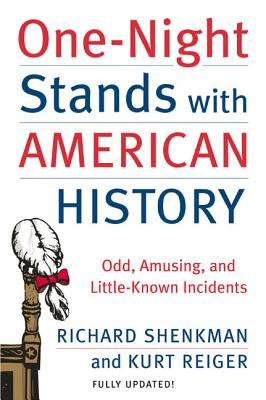 Respect yourself in the morning -- read One-Night Stands with American History!

This collection of little-known facts and anecdotes is American history with the boring parts left out. Richard Shenkman and Kurt Reiger have uncovered numerous stories about hoaxes, inventions, secrets, and rare incidents -- many involving the most famous and powerful people in America.

Even historians find that One-Night Stands with American History features fascinating stories they never knew. Now updated with facts and anecdotes from the last twenty years, this volume is a treasure trove of remarkable stories that will startle, entertain, and inform you. And the best part is that they're all true!

Richard Shenkman is an associate professor of history at George Mason University and the New York Times bestselling author of six history books, including Presidential Ambition; Legends, Lies & Cherished Myths of World History; and Just How Stupid Are We? Facing the Truth About the American Voter. The editor and founder of George Mason University's History News Network website, he can be seen regularly on Fox News, CNN, and MSNBC.

Kurt Reiger recieved his B.A. in American History from Vanderbilt University. Born and raised in Oklahoma City, Oklahoma, he also holds an M.B.A. degree from the Wharton School, University of Pennsylvania.