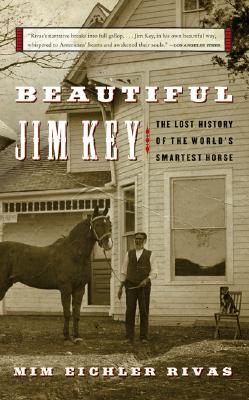 Beautiful Jim Key -- the one-time ugly duckling of a scrub colt who became one of the most beloved heroes of the turn of the century -- was adored not for his beauty and speed but rather for his remarkable abilities to read, write, spell, do mathematics, even debate politics. Trained with patience and kindness by one of the most renowned horse whisperers of his day -- former slave, Civil War veteran, and self-taught veterinarian Dr. William Key -- Jim performed in expositions across the country to wildly receptive crowds for nine glorious years, smashing box office records, clearing towering hurdles of skepticism and prejudice, and earning the respect and admiration of some of the most influential figures of the era, from Booker T. Washington to President William McKinley.

This is the remarkable true saga of a truly exceptional animal -- and the no less exceptional man who led him to greatness.

Mim Eichler Rivas is the author of the acclaimed Beautiful Jim Key, as well as the coauthor of more than eighteen books, including The Pursuit of Happyness and Finding Fish with Antwone Fisher.

“Jim Key, in his own beautiful way, whispered to Americans’ hearts and awakened their soul.” — Los Angeles Times

“A wonderful true story of an extraordinary horse and an equally extraordinary man. Beautiful Jim Key, is astonishing.” — Berry Gordy

“Like Laura Hillenbrand’s SEABISCUIT, this brilliantly recreated history of BEAUTIFUL JIM KEY is destined to become a classic.” — David Geffen

“Beautiful Jim Key represents a rediscovered treasure that has lain hidden for almost a century. . . . Remarkable” — Bob Womack, author of The Echo of Hoof Beats: History of the Tennessee Walking Horse

“Rivas performs an important service by bringing this story to light and reminding us how it was almost lost.” — Knoxville News-Sentinel

“If Beautiful Jim Key were alive today, he’d have a movie deal.” — People

“A wonderful slice of American life at the turn of the last century . . . [Rivas] deserves praise.” — Contra Costa Times

“Seabiscuit had nothing on Beautiful Jim Key.” — Sacramento Bee