Coop: A Year of Poultry, Pigs, and Parenting (Paperback) 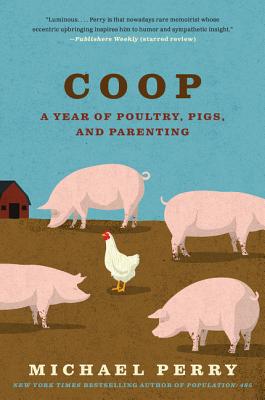 In over his head with two pigs, a dozen chickens, and a baby due any minute, the acclaimed author of Population: 485 gives us a humorous, heartfelt memoir of a new life in the country.

Living in a ramshackle Wisconsin farmhouse—faced with thirty-seven acres of fallen fences and overgrown fields, and informed by his pregnant wife that she intends to deliver their baby at home—Michael Perry plumbs his unorthodox childhood for clues to how to proceed as a farmer, a husband, and a father.

Whether he’s remembering his younger days—when his city-bred parents took in sixty or so foster children while running a sheep and dairy farm—or describing what it’s like to be bitten in the butt while wrestling a pig, Perry flourishes in his trademark humor. But he also writes from the quieter corners of his heart, chronicling experiences as joyful as the birth of his child and as devastating as the death of a dear friend.

Michael Perry is a humorist, radio host, songwriter, and the New York Times bestselling author of several nonfiction books, including Visiting Tom and Population: 485, as well as a novel, The Jesus Cow. He lives in northern Wisconsin with his family and can be found online at www.sneezingcow.com.

“Displays Perry’s charming penchant for nurturing things to life—be it a truck or a garden, a community or a baby—while, at the same time, nodding to the past. . . . Perry can take comfort in the power of his writing, his ability to pull readers from all corners onto his Wisconsin spread, and make them feel right at home among the chickens.” — Seattle Times

“You can read Michael Perry’s COOP as an outrageously funny comedy about a semi-hapless neophyte navigating the pitfalls (and pratfalls) of the farming life. Please do, in fact. But scratch a little deeper, past Perry’s lusciously entertaining and epigrammatic prose, his ultra-charming combo of Midwestern earnestness and serrated wit, and you’ll find a reflective, sincere, and surprisingly touching-at times, even heart-cracking-story about a man struggling to put down roots.” — Jonathan Miles, author of Want Not

“Because Perry is an adept storyteller, he balances the sweeter sections with passages evoking the sting of loss and grief-not unduly, but enough to recall the impermanence of life and the swiftness of its transformations. Dryly humorous, mildly neurotic and just plain soulful—a book that might even make you want to buy a few chickens.” — Kirkus Reviews (Starred Review)

“Michael Perry delivers when it comes to small town Americana. . . . A perfect Father’s Day gift for anyone who’s ever tilled the earth; Perry shines as he reminisces. . . . Perry seems like the kind of guy who’d be more than happy to pull up a chair and discuss the price of eggs over a cup of coffee. His voice makes Coop a heartwarming read chock full of family values.” — Missourian

“Written in engaging prose . . . The author’s keen and often amusing observations about farm chores and the creatures under his care will seem pleasingly familiar to anyone who has spent time on a farm. I often found myself smiling or chuckling. . . . An enjoyable visit to a rural homestead alongside an amiable and benignly quirky companion. . . . Pleasurable.” — San Francisco Chronicle

“Beneath the flannel surface of this deer-hunting, truck-loving Badger is the soul of a poet.” — Chicago Tribune

“Perry probably didn’t set out to write anything more than a time capsule when he wrote Coop. . . . Both literate and earthy, he’s not here to convert, proud though he is of his little section of the world. The timing of Coop, does strike, however unintentionally, at the humbled state of our society. Eggs from backyard chickens are the new pesto. And Perry is an organic granola bar dipped in mud. Wrapped in locally produced bacon.” — Cleveland Plain-Dealer

“The charm of this writer grows with each book. Perry blossoms with Coop. . . . [His] gift is applying the small events of his being (and some not so small) to the larger truths of humanity.” — The Oklahoman

“I don’t know when I’ve enjoyed a book about country living as much as Mike Perry’s COOP. As an adventure narrative, Perry’s details of rural life are much more telling and authentic than any how-to book. But COOP will also appeal to anyone who enjoys good writing. There is a literary gem on nearly every page.” — Gene Logsdon, author of The Contrary Farmer