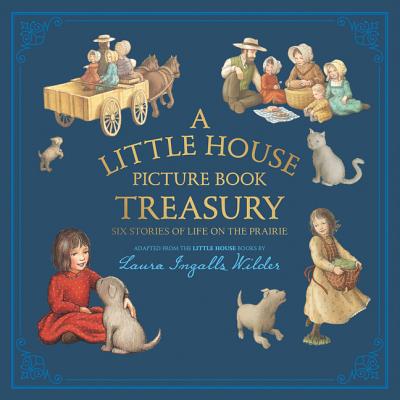 The Little House series introduced generations of readers to Laura Ingalls Wilder’s life on the frontier. Now with this illustrated storybook collection, the youngest readers can share in her world as well.

Laura Ingalls lives in a snug little log cabin with her ma, her pa, her sisters, Mary and Carrie, and their dog, Jack. Almanzo Wilder lives on a farm with his family and lots of animals. These pioneer children have all sorts of adventures, including trips to town, county fairs, cozy winter days, and holidays with family.

The six stories included in this treasury were originally published as stand-alone picture books: A Little Prairie House, Going to Town, County Fair, Sugar Snow, Winter Days in the Big Woods, and Christmas in the Big Woods.

Laura Ingalls Wilder (1867–1957) was born in a log cabin in the Wisconsin woods. With her family, she pioneered throughout America’s heartland during the 1870s and 1880s, finally settling in Dakota Territory. She married Almanzo Wilder in 1885; their only daughter, Rose, was born the following year. The Wilders moved to Rocky Ridge Farm at Mansfield, Missouri, in 1894, where they established a permanent home. After years of farming, Laura wrote the first of her beloved Little House books in 1932. The nine Little House books are international classics. Her writings live on into the twenty-first century as America’s quintessential pioneer story.

Renée Graef received her bachelor's degree in art from the University of Wisconsin at Madison. She is the illustrator of numerous titles in the Little House publishing program, as well as Rodgers and Hammerstein's My Favorite Things and E.T.A Hoffman's The Nutcracker, adapted by Janet Schulman. She lives in Cedarburg, Wisconsin, with her husband and two children.