Newspaper Confessions: A History of Advice Columns in a Pre-Internet Age (Hardcover) 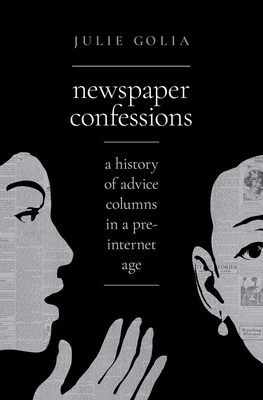 What can century-old advice columns tell us about the Internet today? This book reveals the little-known history of advice columns in American newspapers and the virtual communities they created among their readers. Imagine a community of people who had never met writing into a media outlet, day after day, to reveal intimate details about their lives, anxieties, and hopes. The original "virtual communities" were born not on the Internet in chat rooms but a century earlier in one of America's most ubiquitous
news features: the advice column. Newspaper Confessions is the first history of the newspaper advice column, a genre that has shaped Americans' relationships with media, their experiences with popular therapy, and their virtual interactions across generations. Emerging in the 1890s, advice columns became unprecedented virtual forums
where readers could debate the most resonant cultural crises of the day with strangers in an anonymous, yet strikingly public, forum. Early advice columns are essential--and overlooked--precursors to today's digital culture: forums, social media groups, chat rooms, and other online communities that
define how present-day American communicate with each other. By charting the economic and cultural motivations behind the rise of this influential genre, Julie Golia offers a nuanced analysis of the advice given by a diverse sample of columns across several decades, emphasizing the ways that advice columnists framed their counsel as modern, yet upheld the
racial and gendered status quo of the day. She offers lively, surprising, and poignant case studies, demonstrating how columnists and everyday newspaper readers transformed advice columns into active and participatory virtual communities of confession, advice, debate, and empathy.

Julie Golia is the Curator of History, Social Sciences, and Government Information at the New York Public Library. An active public historian, she tweets at @JuliethePH.