Salt Wars: The Battle Over the Biggest Killer in the American Diet (Hardcover) 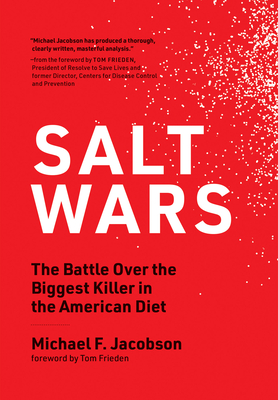 How food industry lobbyists and a small group of scientists have successfully fought government efforts to reduce dangerous levels of sodium in our food.

A high-sodium diet is deadly; studies have linked it to high blood pressure, strokes, and heart attacks. It's been estimated that excess sodium in the American diet causes as many as 100,000 deaths deaths and many billions of dollars in avoidable health-care costs each year. And yet salt is everywhere in our diets—in packaged foods, fast foods, and especially meals at table-service restaurants. Why hasn't salt received the sort of public attention and regulatory action that sugar and fat have? In Salt Wars, Michael Jacobson explains how the American food industry and a small group of scientists have successfully fought government efforts to reduce dangerous levels of sodium in our food.

Despite an abundance of research going back more than half a century showing that high-sodium diets lead to hypertension and other ills, a few scientists argue the opposite—that American consume a healthy amount of salt and that eating less would increase the risk of cardiovascular disease. This “man bites dog” take on sodium confused consumers and was enthusiastically taken up by food industry lobbyists. Jacobson, a salt wars combatant for more than forty years, explains what science actually says about salt intake and rebuts “sodium skeptics.” He discusses what other countries are doing to cut dietary salt, and describes some recent victories in the United States. He advises readers how to reduce salt—warning them against “salt bombs” (Campbell's Chicken Noodle Soup, for example, packs an entire day's worth of sodium in one can)—and calls on them to suit up for the next battle in the salt wars.

Michael F. Jacobson is Cofounder and Senior Scientist at the Center for Science in the Public Interest. He is the author of Six Arguments for a Greener Diet and other books.

"With wit and ease, Jacobson takes readers through the basics (how much salt we eat, where we get it, and the health concerns connected with it) and the minutiae (a take-down of the so-called “sodium sceptics” and the scant if promising progress of regulation from Congress) to offer a clear picture of what consumers should do when we sit down for our next meal."
– Civil Eats

"In his new book, Salt Wars, scientist Michael F. Jacobson makes a compelling argument that salt presents a singular threat to life and finance… One of the most important takeaways of Salt Wars, though, has little to do with salt, although it may well raise your blood pressure. Sodium wars are just one more example of how effective modern propaganda tactics can be in our post-fact world."
– The Washington Post Book World