To Be Sung Underwater: A Novel (Paperback) 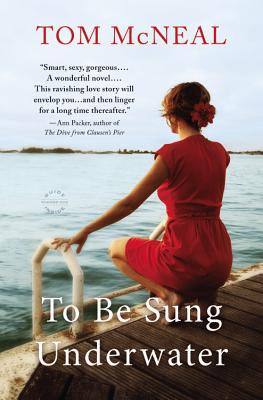 “As a young girl, Judith believed in the kind of love that 'picks you up in Akron and sets you down in Rio.' When she gives up her first love, Willy, she assumes that love like that is not to be had. Instead, she marries the kind of man whose love 'picks her up on Main Street and sets her down at the edge of town.' Now 20 years later, Judith is restless. Her marriage is stagnant, her husband is wandering, and she finds herself staring at a piece of paper with a phone number scribbled on it, a number that might very well take her back to that early dream. You will not want to put this book down!”
— Nancy Simpson, The Book Vault, Oskaloosa, IA

Judith Whitman always believed in the kind of love that "picks you up in Akron and sets you down in Rio." Long ago, she once experienced that love. Willy Blunt was a carpenter with a dry wit and a steadfast sense of honor. Marrying him seemed like a natural thing to promise. But Willy Blunt was not a person you could pick up in Nebraska and transport to Stanford. When Judith left home, she didn't look back.

Twenty years later, Judith's marriage is hazy with secrets. In her hand is what may be the phone number for the man who believed she meant it when she said she loved him. If she called, what would he say?

To Be Sung Underwater is the epic love story of a woman trying to remember, and the man who could not even begin to forget.

Tom McNeal's first novel, Goodnight, Nebraska, won the James A. Michener Memorial Prize and California Book Award, and his short fiction has appeared in The Best American Short Stories, The O. Henry Prize Stories, and The Pushcart Prize XXI. He lives near San Diego with his wife and sons.

"You don't so much read To Be Sung Underwater as you're consumed by it. The characters are unforgettable. The writing is staggering. More importantly, though, it's the courage of this book that sets it apart. It's the bravest, most beautiful book I've read in a long time."—Markus Zusak, author of The Book Thief

"Smart, sexy, gorgeous, and at times devastatingly sad--these words describe the woman at the heart of this wonderful novel almost as well as they do the book itself. This ravishing love story will envelop you for a few days and then linger for a long time thereafter."—Ann Packer, author of Swim Back to Me and The Dive from Clausen's Pier

"To Be Sung Underwater is such an immensely readable novel. McNeal has the enviable talent of making splendid writing look easy at no cost to the complexity and the beauties of what fascinates him (and me) -- the terrain occupied by women and men in love with each other. This is a wonderful book."—Richard Ford

"McNeal's ability to tell the story from a female point of view is shockingly accurate, as is his Richard Russo-esque ability to make small town characters simply complicated....a beautiful novel that bravely examines the effect a broken relationship can have on one's life path."—Carrie Keyes, Seattle Post-Intelligencer

"Bautifully written.... a compelling story, uniting the literary, character-driven novel with what eventually becomes quite a page turner.... This novel will make for great book-club discussions."—Sarah Willis, The Cleveland Plain-Dealer

"This lovely novel is quiet and smart, drawing you so deeply into the characters that the ending might just leave you coming up for air."—Gale Walden, Oprah Magazine

"Love stories have a terrible gravity, a centrifugal force. McNeal has created characters so dimensional, so memorable, that we are caught up in that urgency. Our rationality is compromised; the rules of the world fade away."—Susan Salter Reynolds, Los Angeles Times