The Echo Maker: A Novel (Hardcover) 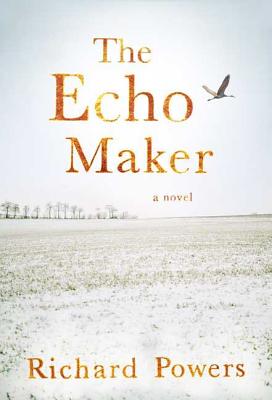 By Richard Powers
Email or call for price
Out of Print

On a winter night on a remote Nebraska road, 27-year-old Mark Schluter flips his truck in a near-fatal accident. His older sister Karin, his only near kin, returns reluctantly to their hometown to nurse Mark back from a traumatic head injury. But when he emerges from a protracted coma, Mark believes that this woman–who looks, acts, and sounds just like his sister–is really an identical impostor. Shattered by her brother's refusal to recognize her, Karin contacts the cognitive neurologist Gerald Weber, famous for his case histories describing the infinitely bizarre worlds of brain disorder. Weber recognizes Mark as a rare case of Capgras Syndrome, a doubling delusion, and eagerly investigates. What he discovers in Mark slowly undermines even his own sense of being. Meanwhile, Mark, armed only with a note left by an anonymous witness, attempts to learn what happened the night of his inexplicable accident. The truth of that evening will change the lives of all three beyond recognition.

Set against the Platte River's massive spring migrations–one of the greatest spectacles in nature–The Echo Maker is a gripping mystery that explores the improvised human self and the even more precarious brain that splits us from and joins us to the rest of creation.

The Echo Maker is the winner of the 2006 National Book Award for Fiction.

Richard Powers is the author of several novels, including The Echo Maker (FSG, 2006), which won the National Book Award and was a finalist for the Pulitzer Prize. Powers has received a MacArthur Fellowship, a Lannan Literary Award, and the James Fenimore Cooper Prize for Historical Fiction. He lives in Illinois.

“A grand novel--grand in its reach, grand in its themes, grand in it patterning . . . If Powers were an American writer of the nineteenth century . . . he'd probably be the Herman Melville of Moby-Dick. His picture is that big.” —Margaret Atwood, The New York Review of Books

“Fascinating . . . In the end we see what Powers, with his beautiful language and broad reach, always wishes to have us see: the eternal mystery of human personality and how it functions in the extreme drama of the modern world.” —O, The Oprah Magazine

“A kind of neuro-cosmological adventure . . . an exhilarating narrative feat . . . Powers is a formidable talent, and this is a lucid, fiercely entertaining novel.” —The Washington Post Book World

“A wise and elegant post-9/11 novel . . . The mysteries unfold so organically and stealthily that you are unaware of his machinations until they come to stunning fruition. . . . Powers accomplishes something magnificent.” —Colson Whitehead, The New York Times Book Review

“Powers may well be one of the smartest novelists now writing. . . . In The Echo Maker, Powers hopes to plumb the nature of consciousness, and he does so with such alert passion that we come to recognize in his quest the novel's abiding theme--What it means to be human will forever elude us.” —Los Angeles Times Book Review

“One of the year's most engrossing.” —Entertainment Weekly

“[Powers's] characters are unforgettable, flesh-and-blood individuals as finely drawn as those of any contemporary fiction writer.” —Steve Weinberg, The Seattle Times