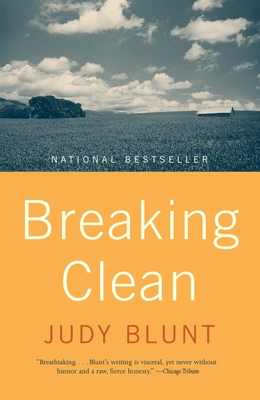 In this extraordinary literary debut third-generation homesteader Judy Blunt describes her hardscrabble life on the prairies of eastern Montana in prose as big and bold as the landscape.

On a ranch miles from nowhere, Judy Blunt grew up with cattle and snakes, outhouse and isolation, epic blizzards and devastating prairie fires. She also grew up with a set of rules and roles prescribed to her sex long before she was born, a chafing set of strictures she eventually had no choice but to flee, taking along three children and leaving behind a confused husband and the only life she’d ever known. Gritty, lyrical, unsentimental and wise, Breaking Clean is at once informed by the myths of the West and powerful enough to break them down.

Judy Blunt spent more than thirty years on wheat and cattle ranches in northeastern Montana, before leaving in 1986 to attend the University of Montana. Her poems and essays have appeared in numerous journals and anthologies. She is the recipient of a Jacob K. Javits Graduate Fellowship and a Montana Arts Council Individual Artist Fellowship. Breaking Clean was awarded a 1997 PEN/Jerard Fund Award for a work in progress, as well as a 2001 Whiting Writers’ Award. She lives in Missoula, Montana.

“Breathtaking. . . . Blunt's writing is visceral, yet never without humor and a raw, fierce honesty.” –The Chicago Tribune

“[An] astonishing literary debut, a dramatic and heartbreaking memoir . . . honed from difficult circumstances and crackling with energy long pent up . . . A fascinating, ferocious coming of age.” –Elle

“Unflinching. . . . A sense of mourning underlies [Blunt's] account, and she honors the land that she still loves by making us intimate with its smallest details.” –The New Yorker

“A beautifully written memoir that is a meditation on how land and her life will always be intertwined . . . Blunt's life has furnished her with the kind of strength most of us can only envy.” –The San Francisco Chronicle

“Riveting . . . This masterful debut is utterly strange, suspenseful and surprising–a story whose threads connecting past and present are as transparent as cobwebs but as strong as barbed wire.” –Time Out New York

“In this assured and moving memoir, Blunt chronicles the wars-and-all realities of modern ranch life. . . . Remarkable.” –Outside

“Scarily good–so right on, so focused, so in-your-face that you have to take the book slowly to cushion the blow.” –National Geographic Adventure