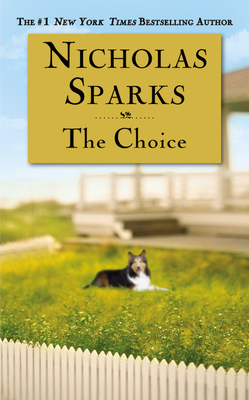 By Nicholas Sparks
$8.99
On Our Shelves Now

Opposites attract in this moving #1 New York Times bestseller of love lost and found between a medical student and the man who captures her heart.Travis Parker has everything a man could want: a good job, loyal friends, even a waterfront home in small-town North Carolina. In full pursuit of the good life - boating, swimming , and regular barbecues with his good-natured buddies -- he holds the vague conviction that a serious relationship with a woman would only cramp his style. That is, until Gabby Holland moves in next door.

Spanning the eventful years of young love, marriage and family, THE CHOICE ultimately confronts us with the most heart-wrenching question of all: how far would you go to keep the hope of love alive?

"Provides subtle lessons in love and hope . . . reinforces the theory that all choices, no matter how seemingly unimportant . . . often have far-reaching, rippling effects. Sparks has become a favorite storyteller because of his ability to take ordinary people, put them in extraordinary situations, and create unexpected outcomes."BookReporter.com

"A heartrending love story . . . will have you entranced. And if The Notebook left you teary-eyed, his latest will have the same effect."Myrtle Beach Sun News