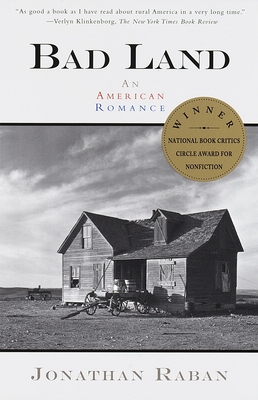 
"No one has evoked with greater power the marriage of land and sky that gives this country both its beauty and its terror. "
--Washington Post Book World

In 1909 maps still identified eastern Montana as the Great American Desert.  But in that year Congress, lobbied heavily by railroad companies, offered 320-acre tracts of land to anyone bold or foolish enough to stake a claim to them. Drawn by shamelessly inventive brochures, countless homesteaders--many of them immigrants--went west to make their fortunes. Most failed. In Bad Land, Jonathan Raban travels through the unforgiving country that was the scene of their dreams and undoing, and makes their story come miraculously alive.

In towns named Terry, Calypso, and Ismay (which changed its name to Joe, Montana, in an effort to attract football fans), and in the landscape in between, Raban unearths a vanished episode of American history, with its own ruins, its own heroes and heroines, its own hopeful myths and bitter memories. Startlingly observed, beautifully written, this book is a contemporary classic of the American West.

Jonathan Raban is the author of Soft City, Arabia, Old Glory, Foreign Land, For Love and Money, Coasting, and Hunting Mr. Heartbreak. He won the W.H. Heinemann Award for Literature in 1982 and the Thomas Cook Award in 1981 and 1991. He has also edited the Oxford Book of the Sea. He lives in Seattle.