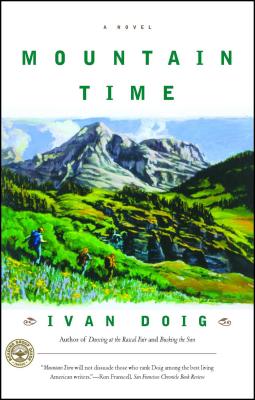 At fifty-something, environmental reporter Mitch Rozier has grown estranged from Seattle's coffee shop and cyber culture. His newspaper is going under, and his relationship with Lexa McCaskill is stalled at "just living together." Then, he is summoned by his sly, exasperating father, Lyle, back to the family land, which Lyle plans to sell in the latest of his get-rich schemes before dying. Lexa follows, accompanied by her sister Mariah, and the stage is set for long-overdue confrontations -- between lovers, sisters, and father and son. Mountain Time is distinguished by humor and a wry insight into the power of family feuds to mark individuals and endure. Set against the glorious backdrop of Montana mountain country, it is a dazzling novel of love, family, and the contemporary West.

Ivan Doig (1939-2015) was a third-generation Montanan and the author of sixteen books, including the classic memoir This House of Sky and most recently Last Bus to Wisdom. He was a National Book Award finalist and received the Wallace Stegner Award, among many other honors. Doig lived in Seattle with his wife, Carol. Visit IvanDoig.com.

Tim McNulty The Seattle Times Doig has fashioned a mythic landscape as memorable and real as Faulkner's....In Mountain Time [he] has delivered us another classic.

Ron Franscell San Francisco Chronicle Book Review A serious story from the reigning master of new Western literature...Mountain Time will not dissuade those who rank Doig among the best living American writers, and one might even begin making comparisons to some of the best dead ones, too. Faulkner comes most readily to mind....[Doig is] bigger than the Big Sky. He stands upon the shoulders of Wallace Stegner and A. B. Guthrie, taller than Edward Abbey and Tom McGuane, and sees much further. He looks homeward, and he sees a place in all our minds, not just in those who live in and write about the West.

Jonathan Yardley The Washington Post Book World [Doig's] abiding love for his home ground carries the day in Mountain Time, as it almost always does in his work....He understands his characters well, and manages to make them all the more interesting not in spite of their flaws but because of them....He lets the story tell itself, which is what stories are supposed to do.

Bob Minzesheimer USA Today A rich, resonant read, crafted out of Western talk and terrain. It deals with the history we're given and the history we make for ourselves....Doig is a writer who deserves wider recognition. Mountain Time is for readers who admire novelists who treat the landscape with as much affection as their characters (think Stegner or David Guterson).

Michael Frank Los Angeles Times There is much to admire in Mountain Time, especially in the relationship between its protagonist, Mitch Rozier, and his cantankerous dying father....In [the] conflicts between father and son, Doig has found a plausible marriage between theme and character, setting and sentiment.

Beth Duris BookPage Distinguished by wonderfully evocative descriptions of the Western landscape, Mountain Time is sure to strike a chord with readers who have struggled with the past and won the freedom to embrace their own lives.

Publishers Weekly If any writer can be said to wear the mantle of the late Wallace Stegner, Doig qualifies, as a steady and astute observer of life in our Western states. Infused with his knowledge and appreciation of the Western landscapes, his novels are a finger on the pulse of the people who try to reconcile their love of open spaces with the demands of modern life, particularly the form of "progress" that threatens the environment....This is an honest and resonant portrait of idealists facing middle age and learning to deal with past issues that shadow their lives.