Beer-Can Chicken: And 74 Other Offbeat Recipes for the Grill (Paperback) 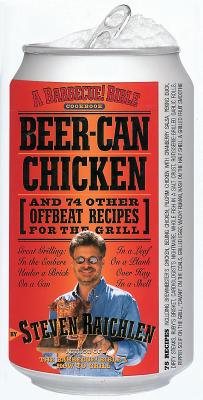 By Steven Raichlen
$12.95
On Our Shelves Now

Chicken on a beer can? You bet! When Steven Raichlen, America's barbecue guru, says it's the best grilled chicken he's ever tasted, cooks stop and listen.

An essential addition to every grill jockey's library, Beer-Can Chicken presents 75 must-try beer-can variations and other offbeat recipes for the grill. Recipes such as Saigon Chicken with Lacquered Skin and Spicy Peanut Sauce, Root Beer Game Hens, Beer-Can Turkey (uses the 32-ounce Foster's), Stoned Chicken (it's grilled under a brick), Dirty Steak, Fish on a Board (Salmon with Brown Sugar Glaze), Mussels Eclade-grilled under pine needles, Grilled Eggs, Wacky Rumaki, Rotisseried Garlic Rolls-even Grilled Yellow Pepper Soup will have your mouth-watering. Whether on a can, on a stick, under a brick, in a leaf, on a plank, or in the embers, each grilling technique is explained in easy-to-follow steps, with recipes that guarantee no matter how crazy the technique, the results are always outstanding. So pop a cold one and have fun.

Steven Raichlen is the author of the New York Times bestselling Barbecue! Bible® cookbook series, which includes the new Project Fire, Barbecue Sauces, Rubs, and Marinades; Project Smoke; The Barbecue Bible; and How to Grill. Winners of 5 James Beard awards and 3 IACP awards, his books have been translated into 17 languages. His TV shows include the public television series Steven Raichlen’s Project Smoke (currently in its 3rd season); Primal Grill; and Barbecue University, and the French language series Les Incontournables du BBQ and Le Maitre du Grill.  Raichlen has written for the New York Times, Esquire, and all the food magazines; he teaches sold-out Barbecue University classes at the Broadmoor in Colorado Springs. In 2015, he was inducted into the Barbecue Hall of Fame. His website is www.barbecuebible.com.