Fifteen Animals! (Boynton on Board) (Hardcover) 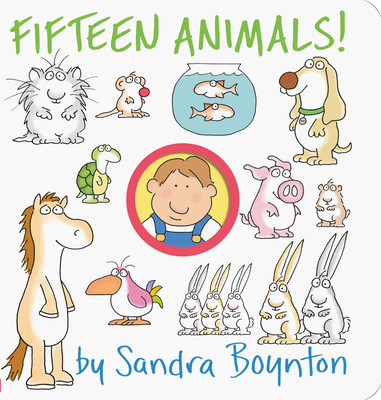 A counting book like no other, from Sandra Boynton!
The amazing Bob! The amazing Boynton! Because who else but Sandra Boynton could imagine 15 Bobs in one book? Actually, that's 14 Bobs, and one Simon James Alexander Ragsdale the Third (he's a turtle), which gives Fifteen Animals! the added dimension of being a unique counting book—count the Bobs, count the pets, count the bunnies, count the fish. Fifteen Animals! also comes with a free song available via download. It's all the energy and appeal of Boynton: the lively language, distinctive illustrations, and inimitable characters. And music. And counting. And, for the first time, a person character, an earnest little boy who loves animals and happily sings:

I really like animals,
I like them a lot.
Fifteen animals is what I’ve got.
I’ve got fifteen animals.
They're friendly and tame, and
I’ve given each one a special name.