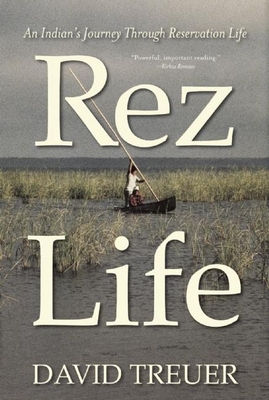 By David Treuer
Email or call for price
Out of Print

Celebrated novelist David Treuer has gained a reputation for writing fiction that expands the horizons of Native American literature. In Rez Life, his first full-length work of nonfiction, Treuer brings a novelist's storytelling skill and an eye for detail to a complex and subtle examination of Native American reservation life, past and present. With authoritative research and reportage, Treuer illuminates misunderstood contemporary issues of sovereignty, treaty rights, and natural-resource conservation. He traces the waves of public policy that have disenfranchised and exploited Native Americans, exposing the tension that has marked the historical relationship between the United States government and the Native American population. Through the eyes of students, teachers, government administrators, lawyers, and tribal court judges, he shows how casinos, tribal government, and the Bureau of Indian Affairs have transformed the landscape of Native American life. A member of the Ojibwe of northern Minnesota, Treuer grew up on Leech Lake Reservation, but was educated in mainstream America. Exploring crime and poverty, casinos and wealth, and the preservation of native language and culture, Rez Life is a strikingly original work of history and reportage, a must read for anyone interested in the Native American story.

In this, his first foray into non-fiction, novelist David Treuer has given us a gritty, raw, and thoroughly authentic look at reservation life as experienced from the inside out. Here is modern America glimpsed through a different membrane, narrated in a fresh new voice. In this searching, at times heartbreaking, but often triumphant melange of history, journalism, and memoir, Treuer loudly proclaims that all reports of the American Indian's demise have been greatly exaggerated.” Hampton Sides, bestselling author of Blood and Thunder

"An invaluable study and vivid account of problematic life on our reservations by a writer--a very good writer!--raised 'on the rez' who knows what he's talking about only too well and also knows how to tell a story, lots of stories, that document and effectively banish a number of misconceptions still held by white society. Highly recommended." Peter Matthiessen

Rez Life is a powerful, poignant, and beautifully written history/memoir that weaves together strands of joy and tragedy, empathy and greed, hope and despair, and tradition and wrenching change. It is an important and insightful book that should be read by anyone interested in the fascinating role of reservations in America’s past, present, and future.” Eric Jay Dolin, author of Fur, Fortune and Empire: The Epic History of the Fur Trade in America

Free of academic jargon, overflowing with terrific storytelling, David Treuer has given us the best book I have ever read on contemporary reservation life. A courageously intimate memoir of family life and community survival in his Great Lakes Indian homeland, it deftly sashays between gritty everyday realities and their well-researched historical contexts and cultural resonances through the magically readable kind of non-fiction that perhaps only a novelist could pull off. Alive with memorable personalities and harrowing dips into reservation hell, wonderfully observed road trips through Indian country and inspiring examples of traditional subsistence and linguistic renewal, this introduction to Native America is destined to be a classic.” Peter Nabokov, Professor of American Indian Studies, UCLA, and author of Where the Lightning Strikes: The Lives of American Indian Sacred Places

"One of the most provocative voices in American Indian literary writing and criticism, David Treuer turns his piercing eye to the intertwined experiences of Native resurgence and crisis. Rez Life is for those who really want to understand Indian casinos, fishing rights, poverty, alcohol, spirituality, family, crime, war, law, sovereignty, violence, love, dedication, endurance... and most everything else. Treuer's powerful story erupts out of family history and the Native past, wraps itself around the veil of modernity, and looks with proud worry toward Indian--and American--futures." Philip J. Deloria, author of Indians in Unexpected Places and Playing Indian

Rez Life is a compelling and unvarnished look at the unique experience of life on an Indian reservation. With a novelist’s eye for detail and a journalistic grasp of history, David Treuer reveals that this country’s crimes against its original inhabitants were not limited to the 18th and 19th centuries. This is a must-read for anyone who cares about the ongoing plight of our Native Americans.” Brian Hicks, author of Toward the Setting Sun: John Ross, the Cherokees and the Trail of Tears

Out of the people and places of Native America David Treuer has crafted a story of vital interest to all Americans." Vice President Walter Mondale

Rez Life isn’t a voyeuristic march through Indian country’s wrenching ills. While Treuer doesn’t shy from the miserable side of Indian life, he unveils a worldgrounded in Minnesota’s Leech Lake Reservation, where he grew upthat is complex and rich. Treuer manages to write a book about Indian life that is often fun and occasionally hilarious.”Lisa Jones, Outside

"Rez Life exposes the reader to the reality of reservation (or, 'rez') life in language and imagery that is raw, honest, rough, and even gut-wrenching." -Spectre Magazine

"Smartly, this book blends journalism, history and memoir... to provide both anecdotes of present-day reservation life and history... Treuer's message - the picture he gives of Indian reservation life today - is not one of defeat or demise but of miraculous survival."Greg Sarris, San Francisco Chronicle

"Dismantles many of the preconceptionsand misconceptionsthe general public has about Native Americans... A unique blend of memoir, history, and journalistic account... lends a human touch to a story that is not often presented in such terms Rez Life is a bracing, eye-opening, often moving read. Highly recommended."Andrea Appleton, Washington City Paper

As novelist David Treuer wryly observes in this sobering yet quietly redemptive book, in spite of how involved Indians have been in America’s business, most people will go a lifetime without ever knowing an Indian or spending time on an Indian reservation... Treuer’s elegant chronicle of the lives and stories of individuals on his own reservation... chips away at the stony structures that embed [negative] views of the reservation in the American consciousness.” Henry L. Carrigan Jr., BookPage

Applied to a book, the word important’ can glaze the eyes. An important’ book sounds like an earnest, educational one you should read, when you get to it, someday, maybe. Rez Life is important in the word's best sense -- one you'll want to read if you're at all curious about contemporary American Indians. It's important in the way Dee Brown's Bury My Heart at Wounded Knee was when it came out in 1970, deeply moving readers as it schooled them about Indian history in a way nothing else had.”Pamela Miller, Minneapolis Star-Tribune

Treuer sees all the poverty, the gangs and the alcohol, but he also sees great beauty in some of the last places untouched by commercial development. He hears the stories of his people in the language of his people, and he sees the pride of survivors.”Neal Conan, NPR

Blends memoir and history to reveal what life on a reservation is really like - neither the festival of dysfunction nor the oasis of noble, nature-loving stoics that many non-Indians imagine. [A] blistering, illuminating, ultimately hopeful book.”Kate Tuttle, Boston Globe

[Treuer] shocks us, he makes us laugh, then he lulls us with poetry before he wallops us with history. I loved that range in writing. I also loved this book for its harsh beauty, its honesty, and for Treuer’s incredible talent at telling stories that mean something. this is an invaluable book for anyone who’s curious or who lives near a reservation.”Terri Schlichenmeyer, Long Island Pulse

[Treuer’s] upbringing on an Ojibwe reservation in Minnesota makes him adept at delving behind stereotypes of Indian life and infuses his account with passion and meticulousness.”The New Yorker

Rez Life is a fascinating, air-clearing look at Native American reservation life, strengthened in equal measure by its anecdotes and its scholarly attention.”Jonathan Messinger, Time Out Chicago

[Rez Life] is not, for all its intimacy, just as it is not exactly a work of reportage or a work of history. Rather, it is a nuanced hybrd, a memoir, broken into six chapters, each of which begins in the personal, then expands outward to a larger theme. Sovereignty, fishing, treaty rights, the tribal justice system, education, language and assimilation Treuer examines all of it, finding associations between the broadest stories and the most individual.”David Ulin, Los Angeles Times