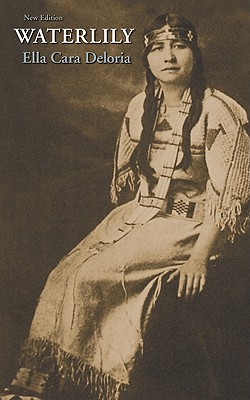 When Blue Bird and her grandmother leave their family’s camp to gather beans for the long, threatening winter, they inadvertently avoid the horrible fate that befalls the rest of the family. Luckily, the two women are adopted by a nearby Dakota community and are eventually integrated into their kinship circles. Ella Cara Deloria’s tale follows Blue Bird and her daughter, Waterlily, through the intricate kinship practices that created unity among her people.   Waterlily, published after Deloria’s death and generally viewed as the masterpiece of her career, offers a captivating glimpse into the daily life of the nineteenth-century Sioux. This new Bison Books edition features an introduction by Susan Gardner and an index.   Purchase the audio edition.

Ella Cara Deloria (1889–1971) was born on the Yankton reservation in South Dakota and grew up in a prominent family on the Standing Rock reservation during a disruptive time in her tribe’s history. She studied at Columbia University with Franz Boas and became an ethnologist. She is the author of Dakota Texts and Speaking of Indians, both available in Bison Books editions, Dakota Grammar, and many other works. Susan Gardner is an associate professor of English at the University of North Carolina, Charlotte, and is the author of several articles and a forthcoming biography on Ella Deloria.

“Exquisite evocation, in novelistic form, of the life of a female Dakota (Sioux) in the mid-nineteenth century, before whites settled the plains. . . . An unself-conscious and never precious or quaint pairing of scholarship and fiction.”—Kirkus

“[Deloria’s] novel is a distinguished work of literature at the same time that it is an important exercise in historical reconstruction, based on her wide and deep study of Dakota texts.”—World Literature Today

“Waterlily is by one who knows the culture from within, and in its instruction about Dakota ethnography the book strikes me . . . as wonderfully fine. Day to day life of the traditional Dakota is rendered in sympathetic detail.”—Arnold Krupat, The Nation

"Deloria tells universal truths cast in an authentic framework of early nineteenth-century Plains Indian society. . . . The feminine point of view is genius."—Journal of the West

“No one is better qualified than Deloria to draw together a series of Sioux female characters such as the ones central to this novel. . . . Deloria was bilingual as well as bicultural. Through her work we see the value of the insider’s perspective as a bridge of understanding for those outside the culture.”—Ines Talamantez, Los Angeles Times