From the Deep Woods to Civilization: Chapters in the Autobiography of an Indian (Paperback) 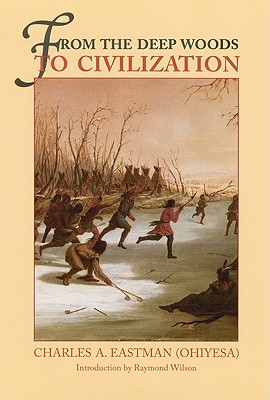 By Charles A. Eastman, Raymond Wilson (Introduction by)
$16.00

In an earlier book, Indian Boyhood, Charles Alexander Eastman (Ohiyesa) recounted the story of his traditional Sioux Childhood and youth. From the Deep Woods to Civilization, first published in 1916, continues the narrative, beginning with his abrupt entry into the mainstream of Anglo-American life in 1873 at the age of fifteen. Eastman went on to become one of the best known educated Indians of his time, receiving a Bachelor of Science degree from Dartmouth in 1887 and a medical degree from Boston University in 1890. From his first job as physician at Pine Ridge Agency, where he witnessed the events that culminated in the Wounded Knee massacre, he devoted his life, both in and out of government service, to helping his fellow Indians adapt to the white world while retaining the best of their own culture.

Raymond Wilson, a professor of history at Fort Hays State University and author of Ohiyesa: Charles Eastman, Santee Sioux (1983), discusses Eastman's life and work in his introduction to this Bison Books edition.