Land of the Spotted Eagle (Paperback) 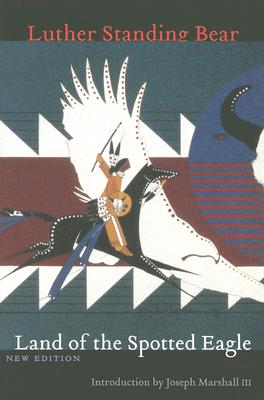 When Standing Bear returned to the Pine Ridge Sioux Reservation after sixteen years' absence, his dismay at the condition of his people may well have served as a catalyst for the writing of this book, first published in 1933. In addition to describing the customs, manners, and traditions of the Teton Sioux, Standing Bear also offered general comments about the importance of Native cultures and values and the status of Indian peoples in American society. With the assistance of Melvin R. Gilmore, curator of ethnology at the University of Michigan, and Warcaziwin, Standing Bear’s niece and secretary, Standing Bear sought to tell the white man “just how” they “lived as Lakotans.”

Land of the Spotted Eagle is generously interspersed with personal reminiscences and anecdotes, including chapters on child rearing, social and political organization, family, religion, and manhood. Standing Bear's views on Indian affairs and his suggestions for the improvement of white-Indian relations are presented in the two closing chapters.

Luther Standing Bear is the author of Stories of the Sioux, My Indian Boyhood, and My People the Sioux (all available in Bison Books editions).

Joseph Marshall (Lakota Sioux) is a historian, educator, speaker, and recipient of the Wyoming Humanities Award. He is the author of several books, including The Journey of Crazy Horse: A Lakota History and The Lakota Way: Stories and Lessons for Living.