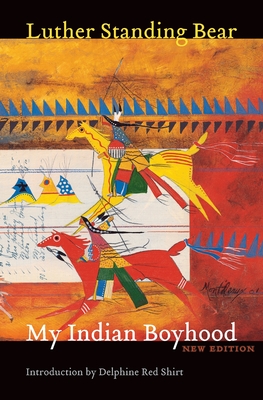 Although the traditional Sioux nation was in its last days when Luther Standing Bear was born in the 1860s, he was raised in the ancestral manner to be a successful hunter and warrior and a respectful and productive member of Sioux society. Known as Plenty Kill, young Standing Bear belonged to the Western Sioux tribe that inhabited present-day North and South Dakota. In My Indian Boyhood he describes the home life and education of Indian children. Like other boys, he played with toy bows and arrows in the tipi before learning to make and use them and became schooled in the ways of animals and in the properties of plants and herbs. His life would be very different from that of his ancestors, but he was not denied the excitement of killing his first buffalo before leaving to attend the Carlisle Indian School in Pennsylvania.

Luther Standing Bear is the author of Stories of the Sioux, My People the Sioux, and Land of the Spotted Eagle (all available in Bison Books editions).

Delphine Red Shirt is a member of the Oglala Sioux tribe and the author of Turtle Lung Woman's Granddaughter and Bead on an Anthill: A Lakota Childhood, both available in Bison Books editions.

"The book is replete with information. Standing Bear details many native beliefs and interpretations, as well as the symbolism, of the things of nature that guided the very lives of the Lakota, and makes lucid many conceptions that white people have usually regarded as mere superstition because not understood."—Saturday Review of Literature