Marriage and Family in the Biblical World (Paperback) 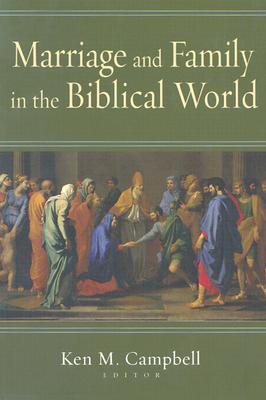 Current debates about marriage and the family assume much about the history of these institutions. But what do we really know about the social and ethical arrangements of these institutions, especially during biblical times?
Placing the history of marriage and family in context requires not only a study of biblical literature that traverses several millennia but also a grasp of extrabiblical literature and sources culled from several different cultural contexts. In this book Ken M. Campbell presents the work of six scholars who trace out the dynamic contours of marriage and family as understood and practiced in six cultural settings: Victor H. Matthews on the ancient Near East, Daniel I. Block on ancient Israel, S. M. Baugh on Greek society, Susan M. Treggiari on Roman society, David W. Chapman on Second Temple Judaism and Andreas K stenberger on the New Testament era.
The result is a well informed and documented map that outlines the similarity and diversity of concepts and customs, including marriage, divorce, sexual ethics, gender roles, children, celibacy, adoption, abortion, contraception and family life, which surrounded and intersected Ancient Israel and the church in New Testament times.