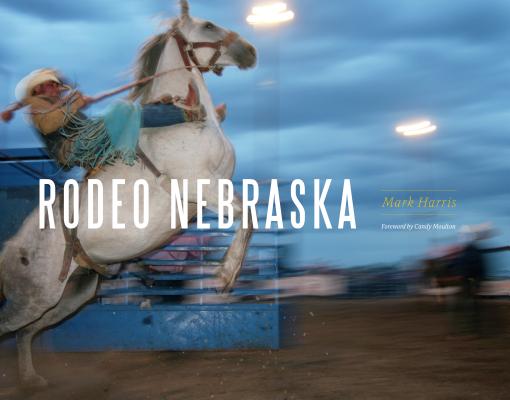 Eight years ago Mark Harris set out on a mission: to portray Nebraska's contemporary rodeo culture more artistically and comprehensively in photographs than anyone ever has--and then write a book worthy of the photos. At eighty-two events in sixty-two separate locations he photographed the competition, the rural crowds, and all things connected with them. He visited ranches that breed broncs, bulls, and speed horses, and spoke to hundreds of competitors. National Geographic photographer Joel Sartore calls the book "a captivating tribute to rodeo like no other."

Harris, a native of McCook, Nebraska, is associate director of the University of Nebraska State Museum at Morrill Hall in Lincoln. His photography has been featured in NEBRASKAland magazine and in the Nebraska History Museum's Nebraska Cowboys exhibit.

Harris's book isn't about big-time rodeo. In its pages you won't find professional circuit events or national rodeo stars. The people of Rodeo Nebraska work all week on ranches and farms and compete on weekends. For them, rodeo isn't a way to make a living. It's simply part of living.

Harris, a native of McCook, Nebraska, is associate director of the University of Nebraska State Museum at Morrill Hall in Lincoln. His photography has been featured in NEBRASKAland and Nebraska Life magazines, and in the Nebraska History Museum's Nebraska Cowboys exhibit.

"Mark Harris's rodeo photographs are simply stunning, particularly because they reveal aspects of this remarkably popular phenomenon that a casual observer never sees, and certainly doesn't understand. The pictures are art, for sure, but they are more than art in the sense that they clearly show us how involved are entire families. We understand, of course, that modern rodeo is quintessentially western American. Not only are Mark's photographs truly beautiful, technical masterpieces, but they also reveal everything from the violence to family engagement associated with that beauty. This book is truly collectible!"—John Janovy Jr., Paula and D. B. Varner Distinguished Professor in Biological Sciences, Emeritus, University of Nebraska at Lincoln; author, Keith County Journal
— John Janovy Jr.

"Mark Harris forces the reader to do something very unusual in a book of photography: read the words. While his images are icing, his memories and observations are where Rodeo Nebraska's most pleasing treasures lie."—Jeff Kurrus, author and editor of NEBRASKAland Magazine
— Jeff Kurrus