Love & Terror on the Howling Plains of Nowhere (Paperback) 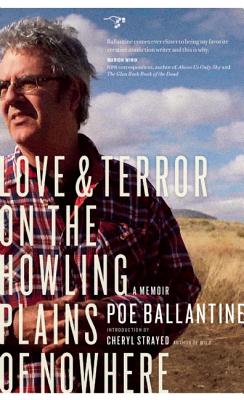 Fans of Truman Capote's In Cold Blood and John Berendt's Midnight in the Garden of Good and Evil will embrace Poe Ballantine's Love and Terror on the Howling Plains of Nowhere.

Poe Ballantine's "Free Rent at the Totalitarian Hotel" included in Best American Essays 2013, and for well over twenty years, Poe Ballantine traveled America, taking odd jobs, living in small rooms, trying to make a living as a writer. At age 46, he finally settled with his Mexican immigrant wife in Chadron, Nebraska, where they had a son who was red-flagged as autistic. Poe published four books about his experiences as a wanderer and his observations of America. But one day in 2006, his neighbor, Steven Haataja, a math professor from the local state college disappeared. Ninety five days later, the professor was found bound to a tree, burned to death in the hills behind the campus where he had taught. No one, law enforcement included, understood the circumstances. Poe had never contemplated writing mystery or true crime, but since he knew all the players, the suspects, the sheriff, the police involved, he and his kindergarten son set out to find out what might have happened.

Cheryl Strayed is the author of the number-one "New York Times" bestseller "Wild, " the "New York Times" bestseller "Tiny Beautiful Things, " and the novel "Torch""Wild" was chosen by Oprah Winfrey as her first selection for Oprah's Book Club 2.0 and optioned for film by Reese Witherspoon's production company, Pacific Standard. Strayed has written the "Dear Sugar" column on TheRumpus.net since March 2010. Her writing has appeared in "The Best American Essays, the New York Times Magazine, the Washington Post Magazine, Vogue, Allure, The Missouri Review, Creative Nonfiction, The Sun" and elsewhere. Her books have been translated into twenty-six languages around the world.

Poe Ballantine is brilliant, sensitive, unique, and universal. Reading his work is inspiring, agitating, and invigorating. He is utterly transparent on the page, a rare thing. He's like a bird that's almost but not quite extinct. This is his best book ever. Cheryl Strayed, author of Wild

Poe Ballantine’s prose cuts right to the bone (the one that’s stuck in America’s throat), but manages to preserve not only the sweetest meat but the barbecue sauce, as well. Mark Twain would have admired his wit, and had Oscar Wilde read him, he would have bought an old Ford pickup and moved to Nebraska the day he got out of the slammer, hoping that some of his style rubbed off on him. A book without style is like a swan without feathersit’s just another plucked chickenbut this new one of Ballantine’s is in its funky way majestic as it zigzags downstream. Poe Ballantine is the most soulful, insightful, funny, and altogether luminous "under-known" writer in America. He knocks my socks off, even when I’m barefoot. Tom Robbins, author of Villa Incognito

Ballantine’s writing is secure insecurity at its best, muscular and minimal, self-deprecating on the one hand, full of the self’s soul on the other.” Lauren Slater, Lying

If the delights of either Poe Ballantine or Chadron, Nebraska were a secret, that is over now. Love and Terror on the Howling Plains of Nowhere is an unprecedented combination of all of the following: true crime page-turner, violently funny portrait of a tiny Western town, field guide to saving a bilingual marriage and raising an autistic child, sutra on living with open mind and big heart. Many of the sentences start on earth and end somewhere in beat-poet heaven. Ballantine comes ever closer to being my favorite creative nonfiction writer and this is why. Marion Winik, Above Us Only Sky. The Glen Rock Book of the Dead and NPR correspondent


Praise for 501 Minutes to Christ:

Ballantine is never far from the trenches . . . the essays are readable and entertaining and contain occasional moments of startling beauty and insight. Still, the themes of addiction (to substances, people, new starts, the prospect of fame), dissatisfaction, and nihilism may limit the work’s appeal; as with writers such as Chuck Palahniuk, some will become rabid devotees, while others will be turned off. Library Journal

Praise for Decline of the Lawrence Welk Empire:

No matter if you didn’t catch the first book. Or if fiction about young guys who drink themselves pie-eyed every night, and lust after each other’s girlfriends is not your favorite genre. Ballantine’s genial, reckless narrator is part Huck Finn, part Hunter S. Thompson. And in a few pages he’s charming you, more than any pot-smoking, card-playing, music-loving, late night party hound” really should. The Seattle Times

This second novel from Ballantine initially conjures images of Lord of the Flies, but then you would have to add about ten years to the protagonists’ ages and make them sex-crazed, gold-seeking alcoholics. Library Journal

Poe Ballantine, in this sequel to God Clobbers Us All, reveals that he is a writer with a keen ear and a blistering wit it’s a prime opportunity to observe a writer’s joyful wallow in the decadence of words. The Austin Chronicle

Edgar’s supersize pal Mountain is the best of the author’s creations: He possesses a merry and absurd sweetness . . . combined with a body mass that can block out the sun.” Booklist

Decline of the Lawrence Welk Empire has the same amped tone and subtropical setting as Hunter S. Thompson’s The Rum Diary but less of the gonzo arrogance and more of that good ol’ American angst.

Fans will remember Edgar from Ballantine’s first novel, God Clobbers Us All, and will again be rewarded with the self-effacing character also visible in his inimitable essays in The Sun magazine. The prose is poised on the brink of perfection, and the plot twists into an unexpected yet perfect conclusion that makes scotch and roadkill seem almost palatable. San Francisco Bay Guardian

Praise for God Clobbers Us All:

It’s impossible not to be charmed by the narrator of Poe Ballantine’s comic and sparklingly intelligent God Clobbers Us All. Publishers Weekly

A surfer dude transforms into someone captivatingly fragile, and Ballantine’s novel becomes something tender, vulnerable, even sweet without that sickly, cloying literary aftertaste. This vulnerability separates Ballantine’s work from his chosen peers. Calmer than Bukowski, less portentous than Kerouac, more hopeful than West, Poe Ballantine may not be sitting at the table of his mentors, but perhaps he deserves his own after all. The San Diego Union-Tribune

Poe Ballantine has created an extremely fast page-turner. Edgar, in first-person narrative, is instantly likeable, and his constant misadventures flow seamlessly. Partially analyzed daydreams hint at an intriguing adolescent intellect without rambling on into psychological overkill. Ballantine paints southern California with voluptuous detail. Green suns, kaleidoscopic blue eyes, yellow moons and other Lucky Charms marshmallows decorate Edgar’s acid-tinged world with an effect more tangible than psychedelic. The blank gloom of the hospital and the florid 70s California coast serve as the arena for this initiation into adulthood. Willamette Week

God Clobbers Us All succeed[s] on the strength of its characterization and Ballantine’s appreciation for the true-life denizens of the Lemon Acres rest home. The gritty daily details of occupants of a home for the dying have a stark vibrancy that cannot help but grab one’s attention, and the off-hours drug, surf, and screw obsessions of its young narrator, Edgar Donahoe, and his coworkers have a genuine sheen that captivates almost as effectively. The Absinthe Literary Review

That the resulting melange of a plot draws the reader’s attention from the first page and leaves one wanting more is a tribute to a storyteller with a keen sense of irony, a precise power of observation, a deep understanding of psychology, and a lyrical command of language It’s not just an eccentric plot that keeps God Clobbers Us All afloat, though. Ballantine’s prose carries metaphorical powers that make a day of mediocre surfing into a symphony, soften even the harsh indignity of an unintended nursing home death, and illuminate the distorted reality of psychedelic hallucination. The Chadron Record

Ballantine pulls no punches as he writes about Edgar’s life in the 1970s. But even though his sexual and drug-related stories are graphic, they are not disturbing. He has a way with words, and this story takes on a life of its own. It’s easy to get involved in the story after page three. After page three, you’re hooked; it’s that simple. Book Review Cafe

Ballantine never shrinks from taking us along for the drunken, drug-infested ride he braves in most of his travels. The payoff and there is one lies in his self-deprecating humor and acerbic social commentary, which he leaves us with before heading further up the dark highway. The Indy Bookshelf

In Ballantine’s world, the trip between a joyful guffaw and overwhelming hopelessness takes the blink of a well-turned sentence. It doesn’t seem to matter what our particular take on life is; the stories teem with such substantial realism and human interest that we have no choice but to disregard our individual dispositions and get on the bus for the next disappointing town, the next rainy bus stop The stories are well worth the price of admission. The Absinthe Literary Review

Part social commentary, part collective biography, this guided tour may not be comfortable, but one thing’s for sure: You will be at home. Willamette Week

Meet the new guide on the lonesome highway. Poe Ballantine’s wry voice, clear eye, hilarious accounts and lyrical language bring us up short by reminding us that America has always been about flight, and for most of its citizens it has been about defeat. His wanderings, drifters, bad motels, cheap wine, dead-end jobs and drugs take us home, the home Betty Crocker never lived in. We’re on the road again, but this time we know better than to hope for a rumbling V-8 and any answers blowing in the wind. The bus has been a long time coming, but thank God it has arrived with Mr. Ballantine aboard. Sit down, give him a listen and make your own list of Things I Like About America. Charles Bowden, author of Blues for Cannibals and Blood Orchid

Poe Ballantine reminds us that in a country full of identical strip malls and chain restaurants, there’s still room for adventure. He finds the humor in situations most would find unbearable and flourishes like a modern-day Kerouac. With his funny, honest prose, Ballantine explores the important questions about being an American: Do I have enough money to buy this bucket of KFC? Can I abide another sixteen-hour Greyhound bus trip? Did my crazy roommate steal my beer again? It’s a book to cherish and pass on to friends. Mark Jude Poirier, author of Unsung Heroes of American Industry and Goats

Poe Ballantine makes sense of American alienation: the impulse to roam endlessly looking for the thing we know doesn’t exist and that place where we belong that could be anywhere. He makes writing really well seem effortless, even as he’s telling us how painful writing is. He knows that life is the most funny when it shouldn’t be, and that the heart breaks the most during small moments. These stories are shining gems. He kills me, this guy. Mimi Pond, author of Splitting Hairs: The Bald Truth About Bad Hair Days

In his search for the real America, Poe Ballantine reminds me of the legendary musk deer, who wanders from valley to valley and hilltop to hilltop searching for the source of the intoxicating musk fragrance that actually comes from him. Along the way, he writes some of the best prose I’ve ever read. Sy Safransky, Publisher/Editor, The Sun