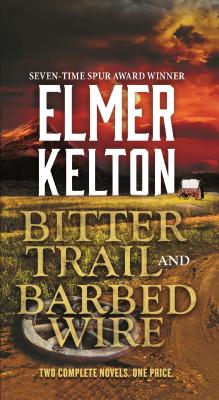 By Elmer Kelton
$9.99
On Our Shelves Now

At one low price, two complete novels by “one of the greatest and most gifted of Western writers.” (Historical Novel Society)

Bitter Trail
Tough teamster Frio Wheeler hauls cotton from Texas to Mexico. But as the Civil War rages through the South, Wheeler must contend with the most difficult challenges he’s ever faced, including imprisonment with the bandidos in league with Union sympathizers and the betrayal of his best friend—his former partner and brother of the woman he loves.

Barbed Wire
Irishman Doug Monahan runs a fencing crew outside the Texas town of Twin Wells, digging post-holes and stringing red-painted barbed wire for ranchers as protection against wandering stock, rustlers, and land-hungry thugs. This fencing operation is opposed by Captain Andrew Rinehart, a former Confederate officer and an old-school, open-range baron of the huge R Cross spread. Rinehart wages a barbed wire war against Monahan—and neither side takes prisoners.

Elmer Kelton (1926-2009) was the award-winning author of more than forty novels, including The Time It Never Rained, Other Men’s Horses, Texas Standoff and Hard Trail to Follow. He grew up on a ranch near Crane, Texas, and earned a journalism degree from the University of Texas. His first novel, Hot Iron, was published in 1956. Among his awards were seven Spurs from Western Writers of America and four Western Heritage awards from the National Cowboy Hall of Fame. His novel The Good Old Boys was made into a television film starring Tommy Lee Jones. In addition to his novels, Kelton worked as an agricultural journalist for 42 years. He served in the infantry in World War II. He died in 2009.

“One of the best.”
—The New York Times

“A genuine craftsman with an ear for dialogue and, more importantly, an understanding of the human heart.”
—Booklist

“You can never go wrong if ... you pick up a title by Elmer Kelton.”
—American Cowboy