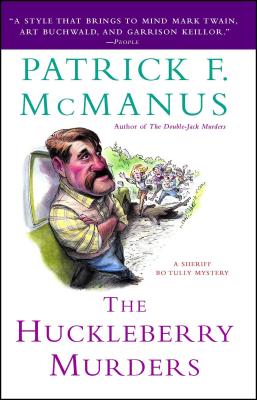 “Idaho Sheriff Bo Tully wanted to spend the day picking huckleberries for a pie. Instead he has three dead bodies in a huckleberry patch and a thorny murder to investigate. A pretty FBI agent gets into the action since the murders took place in a national forest. While Bo likes the ladies, he is not overly fond of the FBI, and part of the fun is watching these two struggle to become a team and go after the bad guys.”
— Deon Stonehouse, Sunriver Books, Sunriver, OR

Sheriff Bo Tully is the brand of Western lawman who uses as much cunning and guile on the ladies as he does solving his cases. He’s a man with a sense of humor and an instinct for the truth, which comes in handy when trying to capture killers and establish order in Blight County.

Sheriff Tully is famous for his hunches—most recently, his suspicion that local retiree Orville Poulson has been murdered by his ranch caretaker, Ray Crockett, a sociopath with a criminal record. The only problem is that Tully has no evidence and no body to prove that a crime has been committed: supposedly, Orville is alive and well and cashing his Social Security checks from Spokane.

But before Tully can follow up on Orville's whereabouts, three unidentified young men are found dead of gusnhot wounds to the head, execution style, in a huckleberry patch on Scotchman Mountain. With the help of confident and beautiful FBI agent Angela Phelps, Tully tries to connect the dots between Poulson’s disappearance, the sudden spate of murders occurring in Blight County, and a big white pickup truck with dual tires wreaking havoc in the area. But when his few potential leads prove either impossible to track down or unexpectedly deceased, Tully must follow his instincts to piece together the puzzle of who is doing the killing, and why. His suspicions lead him straight into a haunted swamp, along with Agent Phelps, his womanizing ex-sheriff father, Pap, expert tracker and good friend Dave, and mountain man Poke. A twisty case packed with murder and mystery, The Huckleberry Murders is the most entertaining tale yet in this beloved series.

Patrick F. McManus is a renowned outdoor writer, humorist, and longtime columnist for Outdoor Life and Field & Stream. His most recent Sheriff Bo Tully mysteries are The Double-Jack Murders and Avalanche. He is the author of many other books, including such runaway New York Times bestsellers as The Grasshopper Trap, The Night the Bear Ate Goombaw, and Real Ponies Don't Go Oink! He lives in Spokane, Washington.