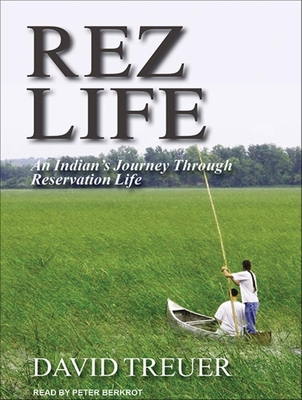 By David Treuer, Peter Berkrot (Narrated by)
Email or call for price
Out of Print

Celebrated novelist David Treuer has gained a reputation for writing fiction that expands the horizons of Native American literature. In Rez Life, his first full-length work of nonfiction, Treuer brings a novelist's storytelling skill and an eye for detail to a complex and subtle examination of Native American reservation life, past and present.With authoritative research and reportage, Treuer illuminates misunderstood contemporary issues of sovereignty, treaty rights, and natural-resource conservation. He traces the waves of public policy that have disenfranchised and exploited Native Americans, exposing the tension that has marked the historical relationship between the United States government and the Native American population. Through the eyes of students, teachers, government administrators, lawyers, and tribal court judges, he shows how casinos, tribal government, and the Bureau of Indian Affairs have transformed the landscape of Native American life.A member of the Ojibwe of northern Minnesota, Treuer grew up on Leech Lake Reservation, but was educated in mainstream America. Exploring crime and poverty, casinos and wealth, and the preservation of native language and culture, Rez Life is a strikingly original work of history and reportage, a must listen for anyone interested in the Native American story.

David Treuer is the author of several books exploring Native American culture, including "Native American Fiction," "The Translation of Dr. Apelles," "The Hiawatha," and "Little."

A veteran of stage and screen, Peter Berkrot held feature roles in "Caddyshack" and Showtime's "Brotherhood," and his audiobooks include "The Woods" by Harlan Coben and "Country Driving" by Peter Hessler. "Library Journal" described Peter's narration of "When the Whistle Blows" by Fran Cannon Slayton as "a brilliant job of personalizing each of the men in Jimmy's life."

"Treuer's account reads like a novel, brimming with characters, living and dead, who bring his tribe's history to life." ---Booklist