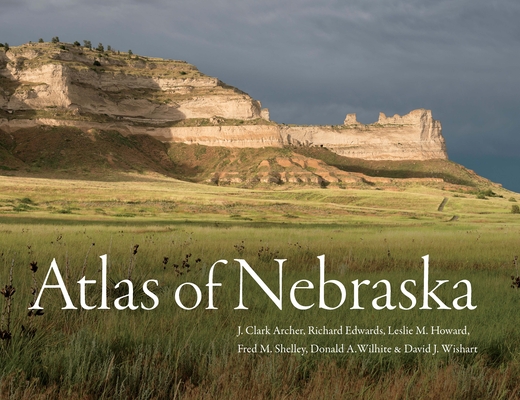 The state of Nebraska has a rich and varied culture, from the eastern metropolitan cities of Omaha and Lincoln to the ranches of the western Sand Hills. The first atlas of Nebraska published in over thirty years, this collection chronicles the history of the state with more than three hundred original, full-color maps accompanied by extended explanatory text.

Far more than simply the geography of Nebraska, this atlas explores a myriad of subjects from Native Americans to settlement patterns, agricultural ventures to employment, and voting records to crime rates. These detailed and beautifully designed maps convey the significance of the state, capturing the essence of its people and land. This volume promises to be an essential reference tool to enjoy for many years to come.

“Atlas of Nebraska is a gorgeous hardcover book that contains scores of Nebraska facts. Packed with scholarly resources, the book also offers an accessible resource for trivia buffs and those who eat, sleep, and breathe Nebraska.”—Nina Buck, Nebraska Life


“Want to know where earthquakes have rattled Nebraska since statehood? There’s a map for that. How about the paths of tornadoes across the state? The origins of foreign-born Nebraskans? Areas state-designated as short of physicians, dentists and pharmacists? Or how horses have migrated from rural to urban areas? There are maps for all that. In fact, the atlas—the first of Nebraska published in more than three decades—chronicles the history of the state with more than 300 original, detailed and full-color maps accompanied by explanatory text. The coffee-table volume pokes into myriad subjects, including the state’s geologic and prehistoric roots, American Indians and the fitful transition from territory to state.”—David Hendee, Omaha World-Herald


“Readers interested in the history of Nebraska will find the atlas a useful reference tool.”—Russell S. Kirby, Historical Geography


“It has been several decades since an effort has been made to produce an atlas of this kind. The updated data and techniques used in the production of this book are apparent when compared to the previous atlases. . . . This book contains such a generous array of maps that it truly possesses something for everyone. Whether you’re a cartophile or just someone living ‘The Good Life,’ the Atlas of Nebraska is a useful and enjoyable addition to any reference library.”—Patrick Haynes, Nebraska History


“The unassuming title of this atlas does not provide a hint of the diverse richness of its contents. Its abundant maps, its survey of our state’s geologic, prehistoric, Native American, and territorial and recent state history, as well as our climate and ecology, are just the beginning of a fact-filled treasure trove. What a wonderful gift to celebrate our state’s 150th birthday!”—Paul A. Johnsgard, winner of the National Conservation Achievement Award and author of Those of the Gray Wind: The Sandhill Cranes, New Edition