Kitten and the Night Watchman (Paperback) 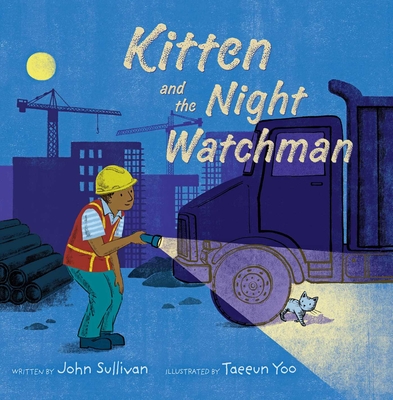 SELECTED AS A BEST BOOK OF 2018 BY THE BOSTON GLOBE, KIRKUS REVIEWS, PUBLISHERS WEEKLY, AND BOOKPAGE

“Empathetic, poetic, and a joy to look at, cute kitty and all.” —Kirkus Reviews (starred review)

“This soft, gentle story is a perfect bedtime story for lovers of trucks and construction equipment, cats, and nighttime wanders.” —BCCB (starred review)

A stray kitten changes the way the watchman sees nighttime in this tender book based on a true story, illustrated by Strictly No Elephants artist Taeeun Yoo.

The night watchman hugs his wife and kids and drives to work.
All night he is alone.
Every hour he makes his rounds.

When he is joined by a stray kitten, the night suddenly seems different. Has the kitten found a new home?

Kitten and the Night Watchman is inspired by the true story of author John Sullivan meeting a stray cat while working as a night watchman. The cat, Beebe, was John’s companion for seventeen years.

John Sullivan received the Ezra Jack Keats Award and Margaret Wise Brown Prize for his debut picture book Kitten and the Night Watchman, also named a best book of the year by The Boston Globe, Kirkus Reviews, Publishers Weekly, and BookPage. He is also the author of Ethan and the Strays and Stanley’s Secret. John is a cat lover and tap dancer who formerly worked as a night watchman. He lives in Chicago.

Taeeun Yoo has twice received the prestigious New York Times Best Illustrated Children’s Book Award. She has illustrated many books, including Strictly No Elephants by Lisa Mantchev, which has been published in fourteen countries. The New York Times called it a “sunny, smart, tongue-in-cheek tale.” She is also the illustrator of Kitten and the Night Watchman by John Sullivan, which received five starred reviews and was named a best book of the year by many publications. Her other books include So Many Days and Only a Witch Can Fly, both by Alison McGhee, and Round by Joyce Sidman. Taeeun was also the recipient of the Ezra Jack Keats Award and the Society of Illustrators’ Founders Award. She lives in South Korea with her family.

The story of a simple friendship that forms over the course of a night shift is given rich life with evocative art and prose. After the title character leaves his family to work as a caretaker of a large construction site, he's visited by a small, gray kitten. The tiny furry companion follows as the night watchman makes his rounds, but when the kitten disappears, the man worries about its fate as he hears a dog, a train, passing cars. This isn't a Stephen King novel; things turn out fine, and the man's family ends up one feline richer. But the journey to get to that dawn reunion is lovely. Illustrator Yoo's sunsets, purple-to-blue night skies, and chalky beams of yellow light set the mood, while her deceptively simple rendering of the kind-faced watchman puts readers into the man's shoes. But the real surprise is the depth of debut writer Sullivan's words. The construction vehicles don't just sit on the lot: "Garbage trucks line up like circus elephants. / A backhoe rises like a giant insect." Sound effects ("peent peent peent" goes a nighthawk) and lived-in, careful observations make it no surprise to learn that Sullivan was a building and equipment guard and that the cat-adoption story is real. The man and his family are people of color. Every life and job is unique; this book's take on the job of a watchman is empathetic, poetic, and a joy to look at, cute kitty and all. (Picture book. 4-8)
— Kirkus *STARRED REVIEW

A night watchman hugs his family and goes to work, where he methodically makes his rounds through an empty construction site. His flashlight’s warm yellow beam illuminates the darkness: “He checks the doors. He checks the workshop.” Debut author Sullivan, who based the story on his own experience, illuminates the inner life of his character as well, using concise, poetic language. The watchman “thinks of his boy and girl, safe and asleep at home.” He’s alert to the beauty of the darkness, too: the big trucks’ fanciful-looking shadows (“A backhoe rises like a giant insect”), the full moon that “shines like an old friend,” the way the air fills with a sound of a train and then becomes still again. Most of all, he is kind: a stray gray kitten joins him on his rounds (“ ‘Back again?’ he asks”), and after worrying when it disappears, the watchman takes the kitten home to join his family. Yoo (Strictly No Elephants) sets a lovely mood, taking readers from sunset to dawn through washes of orange, pink, and blue, the watchman’s compassionate demeanor assuring them that all’s well.
— Publishers Weekly *STARRED REVIEW

The pithy, poetic text brings a sense of calm and wonder, and onomatopoeic words note the many sounds the night watchman hears in the quiet of the dark night. Yoo's textured, serene artwork in beautiful saturated tones perfectly complements Sullivan's lines and conveys a beauty in the night and the construction site that readers might otherwise miss. As the kitten and the night watchman make their rounds, trucks turn into elephants, cranes into giraffes, and a regular night of work turns into a magical night filled with the promise of friendship.
— Booklist STARRED REVIEW

This soft, gentle story is a perfect bedtime story for lovers of trucks and construction equipment, cats, and nighttime wanders. Yoo’s textured digital and hand-print illustrations immerse the viewer in the experience of making rounds with the night watchman and his kitten companion, progressing from the orange of sunset as he leaves for work, through blues and blacks of night warmed by spills of light from the watchman’s flashlight, to the pink-tinged sky of dawn....Sullivan’s lovely text is accessible for independent readers, but it begs to be read aloud; its simple cadences will leave listeners comforted and ready for sleep.
— BCCB STARRED REVIEW