What If You Met A Pirate? (Hardcover) 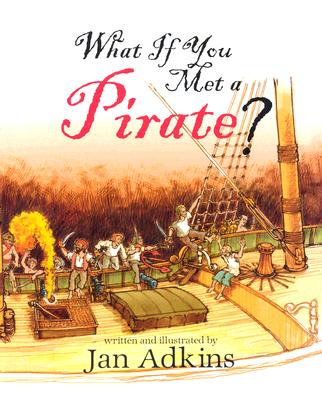 "You know all about pirates. They were big guys with fancy hats, silk jackets, peg legs, and parrots cursing on their shoulders. They sailed big ships with brass guns and made lubbers walk the plank . . . right?
Wrong. . . . "

Pirates and piracy, buried treasure, and life on the high seas are brought to life in this colorful, appealing book.

Jan Adkins most recent book is "Bridges: From My Side to Yours." He lives in the San Francisco Bay area.

Booklist, starred review  Gr. 3-5. Can it be that walking the plank was a fictional punishment invented by illustrator Howard Pyle? In this appealing book, Adkins gives readers the lowdown on what life under the pirate flag was really like. After setting up the conventional portrait of swaggering, singing sailors in colorful duds, he replaces it with a more realistic picture of hard-working sailors who "might swashbuckle just a few hours each month" and bathed considerably less. Yet this realistic portrayal of pirates and their activities is even more intriguing than the romanticized version he debunks. Adkins strikes just the right note in the text, always informative and frequently entertaining as well. Bright with color washes, the excellent, energetic drawings show pirates engaged in a variety of activities, from pumping out the bilge to braiding each other's hair to using the open-air bathroom at the front of the ship. In a send-up of current book marketing, the back cover carries appreciative comments by the likes of Queen Elizabeth I and Leonardo da Vinci. Where pirate fever runs high this spirited presentation will find an enthusiastic audience. For more titles, see the Read-alikes, "Ship Ahoy!" [BKL S 1 04].  School Library Journal, starred review PreSchool-Grade 4–Adkins begins with a stereotypical picture and description of a pirate, then proceeds to debunk the myths that surround these mysterious figures. Contrary to popular belief, pirates did not command large ships with guns and cannons, but preferred smaller, more nimble vessels so they could take victims by surprise and make a quick escape. Real pirates were as skillful with a needle as they were with a cutlass; most sewed their own clothes and mended sails. Packed with interesting but little-known facts, the text illuminates life on the high seas and answers many questions children may have: Did pirates force captives to walk the plank (no) or bury treasure (rarely)? Do pirates still operate today? Each of these questions and more are answered in spreads that include full-color spot illustrations, diagrams, and cross-sections. Adkins's detailed renderings will be as familiar to fans of his other nonfiction books as his tongue-in-cheek humor, both of which appeal to a broad range of ages. A fun and informative read.