Organic Manifesto: How Organic Farming Can Heal Our Planet, Feed the World, and Keep Us Safe (Hardcover) 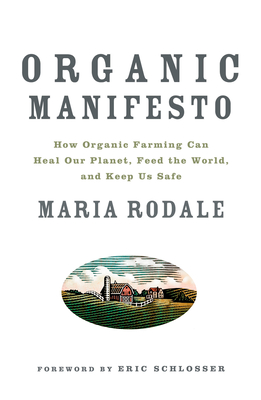 By Maria Rodale, Eric Scholsser (Foreword by)
$23.99
PLEASE EMAIL OR CALL FOR AVAILABILITY

Rodale was founded on the belief that organic gardening is the key to better health both for us and for the planet, and never has this message been more urgent. Now, with Organic Manifesto, Maria Rodale, chairman of Rodale, sheds new light on the state of 21st century farming. She examines the unholy alliances that have formed between the chemical companies that produce fertilizer and genetically altered seeds, the agricultural educational system that is virtually subsidized by those same companies, and the government agencies in thrall to powerful lobbyists, all of which perpetuate dangerous farming practices and deliberate misconceptions about organic farming and foods. Interviews with government officials, doctors, scientists, and farmers from coast to coast bolster her position that chemical-free farming may be the single most effective tool we have to protect our environment and, even more important, our health.

Maria Rodale is the CEO and Chairman of Rodale Inc., the world's leading multimedia company with a focus on health, wellness, and the environment, and the largest independent book publisher in the United States. Rodale reaches 70 million people worldwide through brands such as Prevention and Men's Health; through books such as The South Beach Diet and Al Gore's An Inconvenient Truth; and through numerous digital properties. She is founding editor of the company's newest online venture, Rodale.com, which features the latest news and information about healthy living on a healthy planet, as well as her blog, Maria's Farm Country Kitchen.

Maria Rodale joined the family business in 1987, first working in circulation and direct marketing and eventually leading Rodale's in-house direct marketing agency. In 1998, she served as director of strategy, where she led the strategic review, planning processes, and management changes that refocused the company on publishing information on healthy, active lifestyles. She also led the company's Organic Living division, Rodale's first integrated brand division, where she was the Editor-in-Chief of Organic Gardening and oversaw all of Rodale's gardening books. She joined the Rodale board in 1991 and was elected Chairman in 2007.

She has won numerous awards, including in 2004 the National Audubon Society's "Rachel Carson Award" and in 2007 the United Nations Population Fund's "Award for the Health and Dignity of Women." In 2009 she was named to Pennsylvania's "Best 50 Women in Business" List. She is also a member of the board of Bette Midler's New York Restoration Project, co-chair of the Rodale Institute, and a board member of the Lehigh Valley Health Network.

Maria is a mother, an activist, and a businesswoman and has made promoting the benefits of an organic lifestyle both her personal mission and her business. She lives in an ecologically friendly house in Bethlehem, PA, with her husband, three children, one dog, one cat, and six guinea hens.

“Granddaughter to Rodale's founder, and its current CEO, the author offers a passionate, evenhanded, nonacademic argument for the overall wisdom (economical and ecological) for farming organic. Deeply aware of the public confusion and suspicion surrounding organic farming as a "hippie" cause, Rodale first persuades readers that years of chemical and pesticide use have poisoned our environment” —Publisher's Weekly, May 2010