Bury My Heart at Wounded Knee: An Indianhistory of the American West (Prebound) 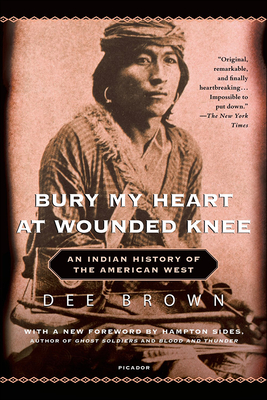 Immediately recognized as a revelatory and enormously controversial book since its first publication in 1971, "Bury My Heart at Wounded Knee" is universally recognized as one of those rare books that forever changes the way its subject is perceived. Now repackaged with a new introduction from bestselling author Hampton Sides to coincide with a major HBO dramatic film of the book, "Bury My Heart at Wounded Knee.
""Bury My Heart at Wounded Knee "is Dee Brown's classic, eloquent, meticulously documented account of the systematic destruction of the American Indian during the second half of the nineteenth century. A national bestseller in hardcover for more than a year after its initial publication, it has sold over four million copies in multiple editions and has been translated into seventeen languages.
Using council records, autobiographies, and firsthand descriptions, Brown allows great chiefs and warriors of the Dakota, Ute, Sioux, Cheyenne, and other tribes to tell us in their own words of the series of battles, massacres, and broken treaties that finally left them and their people demoralized and decimated. A unique and disturbing narrative told with force and clarity, "Bury My Heart at Wounded Knee" changed forever our vision of how the West was won, and lost. It tells a story that should not be forgotten, and so must be retold from time to time.

A librarian for many years at the University of Illinois at Urbana-Champaign, Dee Brown was the author of over twenty-five books on the American West and the Civil War. His "Bury My Heart at Wounded Knee," considered a classic in its field, was a "New York Times" bestseller for over a year, and has been translated into many languages. Dee Brown died in 2002.

Hampton Sides is editor-at-large for "Outside" magazine, and the author of "Ghost Soldiers" and "Blood and Thunder." He won the 2002 PEN USA Award for nonfiction.