Dick Bremer: Game Used: My Life in Stitches With the Minnesota Twins (Hardcover) 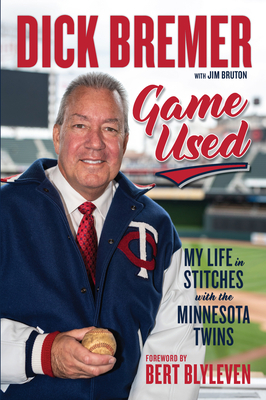 By Dick Bremer, Jim Bruton, Bert Blyleven (Foreword by)
Email or call for price
Out of Print

An unforgettable look at a lifetime of Twins baseball packed with Bremer's self-deprecating humor and passion for the game
​
Dick Bremer's distinctive baritone has served as the soundtrack of Minnesota Twins baseball for over three decades. Millions of fans have enjoyed his observations, insight, and magical storytelling on television broadcasts. Now, in this striking memoir, the Minnesota native and lifelong Twins fan takes fans behind the mic, into the clubhouse, and beyond as only he can.

Told through 108 unique anecdotes—one for each stitch in a baseball—Bremer weaves the tale of a lifetime, from childhood memories of the ballfield in smalltown Dumont, Minnesota, to his early radio days as “The Duke in the Dark,” to champagne-soaked clubhouses in 1987 and 1991, and his encounters with Twins legends ranging from Calvin Griffith and Harmon Killebrew, to Kirby Puckett and Kent Hrbek, to Joe Mauer and Justin Morneau.

This honest and engaging autobiography gives fans a rare seat alongside Bremer and his broadcast partners, including Killebrew, Bert Blyleven, Jack Morris, Jim Kaat, Tom Kelly, and other Twins legends.

Bert Blyleven spent 22 seasons pitching in the major leagues, 11 of them with the Minnesota Twins. He is currently a color commentator for the team alongside Dick Bremer. He was inducted into the Baseball Hall of Fame in 2011.

“Dick Bremer’s magical storytelling is certain to resonate with anyone who loves Minnesota or this wonderful game of baseball.” —Dave St. Peter, Twins president and CEO

“I have always loved the passion that Dick has for baseball and the love that he has for the Minnesota Twins. His great love for the game is brought out in the must-read pages of his new book. The fans and the Twins share great fortune having Dick Bremer in the broadcast booth.” —Kent Hrbek, former Twins first baseman

“My friend and broadcast partner Dick Bremer has knocked it out of the park with his book. Great stories from Dick’s view as the Twins play-by play announcer on their TV network and from his days as a fan following his beloved Twins. Entertaining for fans of every age!” — Jim Kaat, former Twins pitcher and television commentator

“Dick Bremer is one of the best baseball broadcasters of our generation. He now gives us the opportunity to share in his journey. Observations and insights, as well as incredible stories spanning his years covering the great game. An easy and very pleasurable read.” —Paul Molitor, former Twins DH and manager

“For all of us who have had the pleasure of listening to or even working with Dick Bremer, his passion for the game of baseball is evident. I can’t think of anyone in Twins Territory more fitting to tell us of his life inside and outside of the game of baseball.” —Justin Morneau, former Twins first baseman

“From Dumont to the big leagues, Dick has seen it all. Luckily, he’s shared it with all of us.” —Dave St. Peter, Twins president and CEO