The Milwaukee Brewers at 50 (Hardcover) 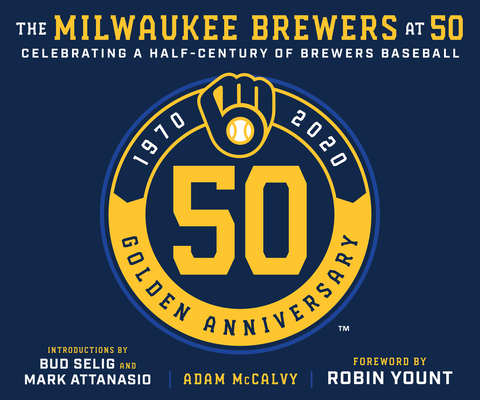 “McCalvy has collected the best stories and photos from 50 years of Milwaukee Brewers baseball. As the ad boys say, ‘A must for every Brewers fan.’” —WSAU News

Relive the passion and excitement of the Brewers' first 50 years in Milwaukee.

In celebration of the franchise’s 50 seasons in Wisconsin, The Milwaukee Brewers at 50 is a visually stunning retrospective featuring rare images from the team’s archive.

This official commemorative book tells the stories behind all the iconic moments, the legendary players and people, and so much more.

Featuring hundreds of photographs and insightful writing from MLB.com reporter Adam McCalvy, this is a lavish celebration honoring the Brewers and those who have supported and sustained the team for half a century: the fans, the city, and the state of Wisconsin.

Adam McCalvy is the Milwaukee Brewers beat reporter for MLB.com.

“Brewers fans are just different, they are Milwaukee! [McCalvy] captures that while celebrating half a century of Brewers Baseball.” —Cristina Tuso, CBS 58 Sports

“Excellent book for any Brewers fan! A ton of pictures and historical moments from the last 50 years of baseball in Milwaukee.” —Jillian, Goodreads

“Adam’s book can whet the appetite for the national pastime.” —WTMJ-TV Milwaukee