Dick Bremer: Game Used: My Life in Stitches With the Minnesota Twins (Paperback) 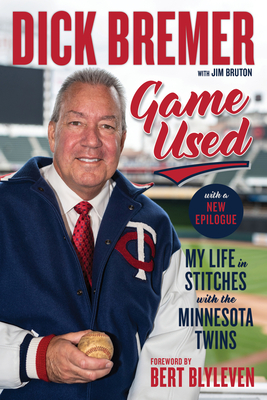 An unforgettable look at a lifetime of Twins baseball packed with Bremer's self-deprecating humor and passion for the game
​
Dick Bremer's distinctive baritone has served as the soundtrack of Minnesota Twins baseball for over three decades. Millions of fans have enjoyed his observations, insight, and magical storytelling on television broadcasts. Now, in this striking memoir, the Minnesota native and lifelong Twins fan takes fans behind the mic, into the clubhouse, and beyond as only he can.

Told through 108 unique anecdotes—one for each stitch in a baseball—Bremer weaves the tale of a lifetime, from childhood memories of the ballfield in smalltown Dumont, Minnesota, to his early radio days as “The Duke in the Dark,” to champagne-soaked clubhouses in 1987 and 1991, and his encounters with Twins legends ranging from Calvin Griffith and Harmon Killebrew, to Kirby Puckett and Kent Hrbek, to Joe Mauer and Justin Morneau.

This honest and engaging autobiography gives fans a rare seat alongside Bremer and his broadcast partners, including Killebrew, Bert Blyleven, Jack Morris, Jim Kaat, Tom Kelly, and other Twins legends.

Dick Bremer has been the lead television announcer for the Minnesota Twins since 1983. He has also called basketball, football, and hockey games for the University of Minnesota. Bremer was inducted into the Minnesota Broadcasting Hall of Fame in 2013.

Jim Bruton is the author of several books, including A Tradition of Purple, Gopher Glory, We Love Our Twins, and The Big House. Jim is an adjunct faculty member at several colleges and universities in the Twin Cities.

Bert Blyleven spent 22 seasons pitching in the major leagues, 11 of them with the Minnesota Twins. He is currently a color commentator for the team alongside Dick Bremer. He was inducted into the Baseball Hall of Fame in 2011.