Machine Made: Tammany Hall and the Creation of Modern American Politics (Paperback) 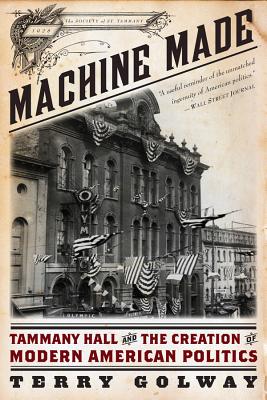 “Golway’s revisionist take is a useful reminder of the unmatched ingenuity of American politics.”—Wall Street Journal

History casts Tammany Hall as shorthand for the worst of urban politics: graft and patronage personified by notoriously crooked characters. In his groundbreaking work Machine Made, journalist and historian Terry Golway dismantles these stereotypes, focusing on the many benefits of machine politics for marginalized immigrants. As thousands sought refuge from Ireland’s potato famine, the very question of who would be included under the protection of American democracy was at stake. Tammany’s transactional politics were at the heart of crucial social reforms—such as child labor laws, workers’ compensation, and minimum wages— and Golway demonstrates that American political history cannot be understood without Tammany’s profound contribution. Culminating in FDR’s New Deal, Machine Made reveals how Tammany Hall “changed the role of government—for the better to millions of disenfranchised recent American arrivals” (New York Observer).

Terry Golway was a journalist for thirty years, writing for the New York Observer, the New York Times, and other venues. He holds a PhD in American history from Rutgers University and is currently the director of the Kean University Center for History, Politics, and Policy in New Jersey.

An important but forgotten story—of how American politics once worked for the poor and weak rather than, as today, only for the rich and powerful.
— Kerby A. Miller, author of Emigrants and Exiles

Terry Golway’s Machine Made delivers a refreshingly revisionist verdict on the Irish-dominated Democratic organization whose ring reverberated mightily in the late 19th and early 20th centuries and then faded into a faint echo… If Boss Tweed and Richard Croker remain the defining faces of Tammany, Mr. Golway… advances a breezy and convincing case that Al Smith, Senators Robert F. Wagner and Herbert Lehman, and their mentors, Tom Foley and Charles Francis Murphy, deserve distinguished pedestals in that pantheon, too.

A work that knowledgeably readjusts Tammany’s reputation from a nest of corruption to an important crusader for the poor and downtrodden.
— Kirkus Reviews

[A] valuable and enjoyable analysis describing how the political machine changed the role of government—for the better to millions of disenfranchised recent American arrivals… [The] legacy Mr. Golway is so passionate about is undeniable. Tammany Hall, for all the many flaws of its leaders, helped create a welcoming environment for immigrants, making New York and the United States the beacon of hope for those seeking a better life… Now, that’s a legacy worth remembering.
— Steven Fulop - The New York Observer