Tales of Witchcraft and Wonder: The Venomous Maiden and Other Stories of the Supernatural (Hardcover) 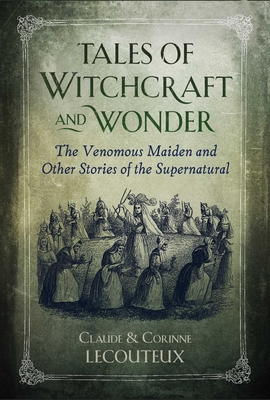 A collection of tales from the Middle Ages focused on otherworldly powers, magical animals, miracles, demonic apparitions, and supernatural events

• Explores how the tales transformed over the ages and their origins in Classical Antiquity, the Middle East, and India

The Middle Ages witnessed the blossoming of oral traditions whose echoes can still be found in many legends, fables, and tales today.

In this collection of medieval tales of witchcraft, wonder, and the supernatural, Claude and Corinne Lecouteux explain how many of these stories arose in Classical Antiquity while some made their way into Dark Ages Europe from the Middle East and India. Offering commentary for each tale, the authors place them in historical context and analyze their cultural and esoteric associations. They include stories never- before-translated from their original Latin or demotic versions and show how, unlike the well-known fairy tales made popular by the Brothers Grimm, many stories were purposely left in obscurity because they presented scandalous depictions of popes and other notables. Additionally, for many of the tales, the authors scrupulously peel back the Christian veneer to show how the stories were instrumental in assuring the survival of age-old pagan beliefs across the centuries.

These beliefs are explored through tales of animals with magical powers and the ability to converse with humans, including the tale of the Grateful Lion made famous through Aesop’s fables; stories of individuals with supernatural or otherworldly powers, like the Venomous Maiden who poisons all men who have relations with her; legends of miracles and wondrous things that violate the laws of nature, such as people returning from the dead to help a descendant; and stories of witchcraft, magic, and demonic apparitions, including the pope who was a disguised demon. The authors also explore tales of supernatural spouses and illicit love affairs, wisdom teachings and parables of fools, and heroic legends.

Claude Lecouteux is a former professor of medieval literature and civilization at the Sorbonne. He is the author of numerous books on medieval and pagan afterlife beliefs and magic, including The Book of Grimoires, Dictionary of Ancient Magic Words and Spells, and The Tradition of Household Spirits. He lives in Paris.

Corinne Lecouteux is a translator specializing in tales and legends. She lives in Paris.

“Claude and Corinne Lecouteux’s Tales of Witchcraft and Wonder is a scholarly but accessible study of the tales, stories, and fables that circulated and were popular in the European Middle Ages. What links them is a magical worldview that connects humans directly with elemental forces and the worlds of eldritch spirits and intelligent animals. Tales of Witchcraft and Wonder also contains many lesser-known but compelling tales that re-create the spirit of uncanny human experience in former times.”
— Nigel Pennick, author of Operative Witchcraft, Witchcraft and Secret Societies of Rural England, and