Ephesiology: A Study of the Ephesian Movement (Paperback) 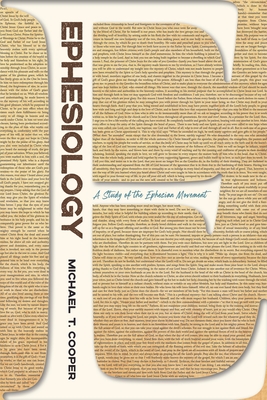 The city of Ephesus was the site of the most significant church planting movement in the early church, with 40 percent of the New Testament texts relating to it. What made that city the epicenter of the movement? And how can we replicate sustained movements in a world that feels so different?

This is not another methodology or attempt to recontextualize evangelicalism. Rather, it is a journey from the launch of the church in Ephesus as it became a movement grounded in God's mission and led by those who multiplied generations of disciples. Michael T. Cooper focuses on Paul and John as missiological theologians who successfully connected Jesus's teaching with the cultural context and narrative of the people in Ephesus. Their ability to relate the God of all creation to a people who sought him in vain resulted in "the Way," transforming the religious, intellectual, economic, and social fabrics of the Ephesian society.

Ephesiology offers a comprehensive view of the redemptive movement of the Holy Spirit in this city and compels us to ask the question: how can we effectively connect Christ to our culture? Through this study of a movement, discover how the Holy-Spirit still changes lives, cities, and the world.

Michael currently serves as an executive for a missions agency, training national leaders in evangelism, discipleship, leadership development, and church planting. He is the former president and CEO of an international NGO. In 2010, he founded a Business as Mission initiative that focused on helping alleviate spiritual and economic poverty in the developing world. For a decade he equipped undergraduate and graduate students at Trinity International University with skills to engage culture. He has thirty years of ministry and missions experience, ten years as a pioneer church planter in Romania after the fall of communism. He holds a MA in Missions from Columbia International University and a PhD in Intercultural Studies from Trinity Evangelical Divinity School. Throughout his career, Michael has focused on creative ways to engage difficult-to-reach people with the gospel.