Turkey Tails and Tales from Across the USA: Volume 1 (Hardcover) 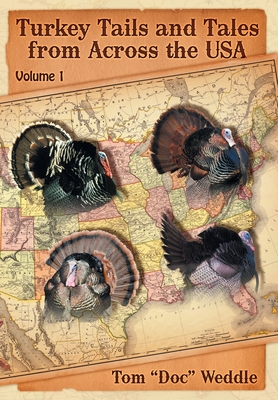 This book is a collection of stories written by one of America's most traveled and experienced turkey hunters; a man who has taken multiple toms from 49 states. Such a feat didn't come easily, so you might expect these pages to fairly drip with wise words of wisdom and sage advice on how to hunt those wily, elusive birds...and they do. However, "Doc" Weddle didn't write an instruction manual. Instead, he takes the reader on a trip down memory lane to recall exciting hunts which helped shape him into becoming the true "Turkey Man" that he is today. Novice or veteran readers alike will undoubtedly gain valuable knowledge here, but the author is first and foremost a storyteller, and he has written this book simply to entertain his audience in a manner reminiscent of outdoorsmen standing around campfires and sharing the colorful details of their hunts with cohorts and companions.

The tales told between these covers will propel the reader across every geological region of the United States; from the hot, humid, jungle habitat of southern Florida, to the arid, cactus-laden plains of the desert southwest, and right on up into the snow-capped mountain states...plus, nearly everywhere else, in between Whether Doc is chasing after the Rio Grande, Osceola, Eastern, or Merriam's subspecies, these accounts are bound to strike a chord with fellow turkey hunters, for they come straight from the heart of a man who has literally designed a life around hunting turkeys all spring long, and wherever he chooses to go. Additionally, there is an element of awe factor involved here, since just about every one of these tales take place on public lands. Few people would be willing to endure the hardships inherent in following such a difficult path, but our author prides himself on persevering through adverse conditions, and excelling in tough environments where others tread lightly, if at all. The reality is that he's been doing this very thing for over three decades, and never returns home without new and exciting stories to tell. His cooler usually contains fresh turkey meat, as well.

These accounts of pursuing the "poor man's big game" are filled with all the joys and jubilations that come from a remarkable lifetime spent afield, but they're also spiced with the problems and occasional heartbreaks which inevitably occur during any difficult quest pursued. Exciting and fascinating encounters with wildlife (both animal, and human) seem to be a regular occurrence on the long and winding path of Doc's travels, and anyone who shares his same passions for early morning sunrises spent communicating with America's Grandest Gamebird is bound to enjoy reading this book.