Turkey Tails and Tales from Across the USA: Volume 2 (Hardcover) 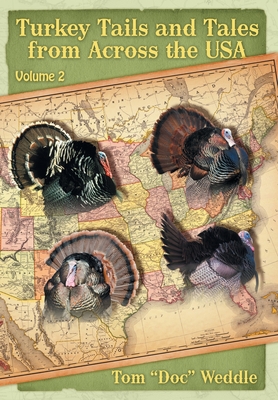 This is the second book in a series of turkey hunting recollections written by Tom "Doc" Weddle. It details not only the excitement and thrills generated during his annual 12-week trek across America chasing after this greatest of gamebirds, but also many of the trials and tribulations suffered along the way. The author's first volume took his readers along for the ride as he learned the turkey hunting game from 1983-1993, and this one covers the years 1994-2000. Alternating chapters expound upon themes which he just feels like talking about. Weddle is one of the country's most traveled turkey hunters, so his stories and opinions will undoubtedly be of interest to anyone sharing in his springtime passions. Although the book wasn't designed as an instruction manual, there's a wealth of knowledge contained within its storytelling pages. Furthermore, the author's conversational style of writing makes for easy, enjoyable reading.

Since 1983, Doc Weddle's single-minded compulsion for turkey hunting has led him to every state which holds a spring season. Alaska is the only one that doesn't. No other hunter in America has killed at least two birds in every one of these states, and yet Weddle is now only five states away from having accomplished this amazing feat four times. What's more, he can boast of having taken toms on public land in every state except North Dakota, which doesn't allow non-residents that opportunity. Obviously, this is a man who loves turkey hunting more than just about anything else in the world. A book written by him comes from a rather unique perspective, and as more and more hunters across America seek to complete their own coveted U.S. Super Slam, they will undoubtedly find his experiences, tips, and advice of great value.

Turkey hunters throughout the ages have always enjoyed sharing tales of their maddening encounters with an adversary so adept at making them look inept, and Weddle is a good storyteller who clearly reveres and honors this noble bird. He's also an astute student of the turkey hunting game and its traditions, and his writings reflect the same sort of values and desire to do things the "right" way as steered the old-time "Turkey Men" of the past. Those fellows fully understood how consistently losing to a bird-brained opponent was a perfectly acceptable outcome, and Doc Weddle gets that, as well. After all, success in this sport can't be measured by the number of dead birds to a man's credit. Rather; it's in the very difficulties encountered, and in how those shape him Reading Doc's books will help you to understand all of that...and give you a glimpse of the inner drive which defines folks like him.