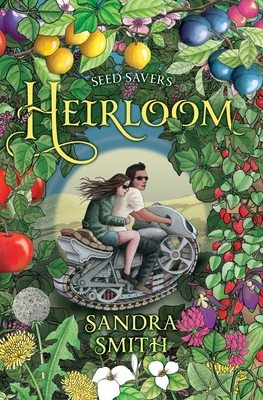 This is book number 3 in the Seed Savers series.

It's late in the twenty-first century and large corporations have merged with U.S. government agencies to control the nation's food supply. Gardening is illegal and most people no longer know what real food is.

Thirteen-year-old Clare and her brother Dante have escaped to Canada where the old ways still exist. There they make friends with the roguish Jason and learn the political history of their own country's decline of freedoms.

Meanwhile, Lily, the friend who was left behind, begins a journey to find the father she never met--a former leader in the ill-fated Seed Savers rebellion of fifteen years earlier. From Florida to the Smoky Mountains, Lily follows the signs in search of her father and is helped along the way by the quirky characters she meets. Not to mention the attractive Arturo who shows up midway to "protect" her.

Heirloom seamlessly weaves the gentle agrarian story of Clare and Dante together with the swiftly-paced adventure of Lily and Arturo. Themes of family, empowerment, and politics meet in this futuristic tale nostalgic for the past.