The Astronomy of the Bible: An Elementary Commentary on the Astronomical References of Holy Scripture (Illustrated) (Paperback) 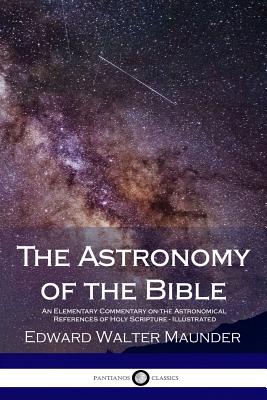 By Edward Walter Maunder
$8.98
Email or call for price.

The Bible's mentions of astronomy are examined in this book by astronomer Edward Walter Maunder, whose work advanced the study of sunspots. This premium edition includes the original illustrations.
As a professional astronomer working in a scientific environment, Maunder was also fascinated by how human understanding of astronomy improved throughout history. As the son of a Wesleyan minister, the author was raised in a Christian environment and had experience with the Bible during his youth. This book sees him revisit the Old and New Testaments to explain how astronomy was understood and used in the Biblical era.
The ancient peoples witnessed and described many astronomical phenomena in their writings, and the Holy Bible is no exception. The sun and moon are frequently referred to in the scriptures, are as astronomical phenomena such as comets and meteorites. Eclipses fascinated the ancients, and various spiritual attributions for all manner of events in the sky are present in the Bible. The importance of the heavens is clear in the nativity tale of Jesus Christ, in which we hear of the Star of Bethlehem.
At the time the Bible was written, the ancient peoples of the Middle East were already familiar with the constellations established by the Egyptians. As Maunder demonstrates, these would receive reference in the Bible also. Later in the book, Maunder investigates how astronomy influenced the ancient calendar and the measurement of time. The passing of the weeks and the marking of the festivals was aided by the phases of the moon and length of the day, giving astronomy a practical importance.
Although working in science, the author maintained his lifelong Christian beliefs. One aim of this book is to show that religious beliefs and scientific observations of the stars can be reconciled. This edition of the text includes the crucial charts and illustrations, helping readers to understand the points raised in the text.